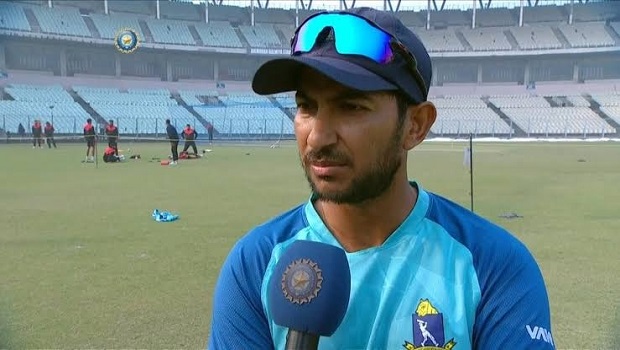 Anustup Majumdar proved to be another good hitman with an unbeaten century for Bengal after a familiar top-order collapse against Karnakata on the opening day of their Ranji Trophy semi-final on Saturday.

The batsman single-handedly took his side to 275 for nine against the star-studded Karnataka; which was another milestone after getting his career-best 157 from a similar position in the quarterfinals of the competition.

After Bengal was told to bat, Majumdar recorded an unbeaten 120 (173 balls; 18×4, 1×6) to revive his team’s innings helping the side to maintain the goal of reaching the final after 13 years.

The first dismissal happened when Karnataka pace spearhead Abhimanyu Mithun removed Abhishek Raman (0) in the 16th delivery of the innings via DRS.

This was the first time that DRS will be used in domestic cricket. But it is being used with limited options as there was no HawkEye, Snickometer or UltraEdge.

Bengal was not getting enough run but turned the game around from 46/5 after the top orders collapsed due to reckless shots. The skipper Abhimanyu Easwaran (15) and Manoj Tiwary (8), were sent back to the Pavillion as well.

As the scoreboard read 62/44, Majumdar came in after Tiwary’s dismissal. The batsman was removed while trying to hit spinner K Gowtham across the line.

The struggle continued when Ronit More (2/45) removed Sudip Chatterjee (20) and Shreevats Goswami (0) in four balls leaving the home tottering at 67/6 at lunch.

Afterwards, Majumdar left his bad stints with the Indian Railways, played with poise and revived the innings in the last two sessions with a century for the ninth wicket with Akash Deep (44).

All-rounder Shahbaz Ahmed also came in to steady the ship for Bengal, His 72-run partnership with Majumdar came quickly from 119 balls.

Ahmed, who is a rookie left-hander, has proven to be a revelation this season. He continued his form with seven boundaries. He was later removed up by a peach of a delivery by Karnataka pace spearhead Abhimanyu Mithun (3/65).

Akash Deep also came in to give Majumdar the needed support by smashing three sixes and three boundaries en route to his career-best 44.

In the entertaining final session for Bengal, They were at the crease for almost two hours and produced 103-run from 136 balls. This left the Karun Nair-led side, frustrated.

Majumdar took full advantage of the tired Karnataka bowlers as the Eden Gardens wicket eased out from the second session. Their three-pronged pace attack got tired, and Majumdar played his shots against the sole spinner Krishnappa Gowhtam who bowled 26 overs.

Majumdar’s four hours and 11 minutes scalp produced his unbeaten knock from 173 balls, and he notched up his ninth first-class hundred, which is his seventh in Ranji Trophy, via a flick in the square leg boundary off Mithun.