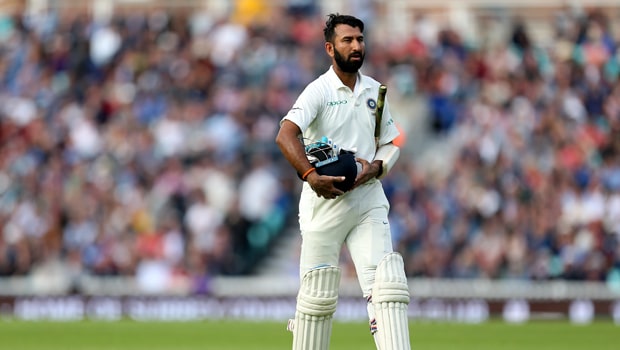 Prolific Test batsman, Cheteshwar Pujara on Sunday, slammed 248, helping Saurashtra to post a 581 for seven declared on the second day of their Ranji Trophy Group B match against Karnataka.

This is his 13th first-class double century, which takes him to the league of a selected group of cricketing greats.

Pujara, who had smashed his 50th first-class century, became the first Indian player with most first-class double centuries when he scored his 12th double ton in 2017 to go past Vijay Merchant.

The prolific batsman is now the third player to record seven double centuries in Ranji Trophy after smashing 248 on Sunday. He is also at joint second with Ajay Sharma and two behind Paras Dogra, who played most cricket for Himachal Pradesh.

With a completed 6000 runs in Ranji Trophy during the course of his marathon knock,
Pujara, alongside senior batsman, Sheldon Jackson (161) rescued Saurashtra with a massive 394-run stand for the third wicket after losing their two openers for only 33 runs on the board on Saturday.

Pujara resumed the second day, Pujara resumed on 162 and raised his double ton on Sunday. He was eventually dismissed for 248 off 390 deliveries with the help of 24 fours and a six.

Karnataka responded but were 13 for 1 in eight overs.

In the other game, Haryana made a remarkable comeback to take the upper hand in their Ranji Trophy Elite Group C match against Odisha courtesy of left-arm spinner, Tinu Kundu who grabbed five wickets in the encounter at the Chaudhary Bansi Lal Cricket Stadium in Lahli.

Haryana was initially ousted for a paltry 90 after electing to bat. They also bowled out Odisha for 160 but replied strongly in their second essay by posting 218 for five. This gives them an overall lead of 148 going into the penultimate day.

They also thanked their stars as Odisha lost their remaining five wickets with the addition of just 19 runs inside nine overs.

Their collapse began when Kundu dismissed Sujit Lenka for 26, while skipper Harshal Patel (3/52) removed the set batsman Biplab Samantray (52), who was ousted immediately after scoring his half-century.

In their second innings, Haryana batted sensibly with openers Shubham Rohilla (48) and Ankit Kumar (46), putting up a 101-run stand.