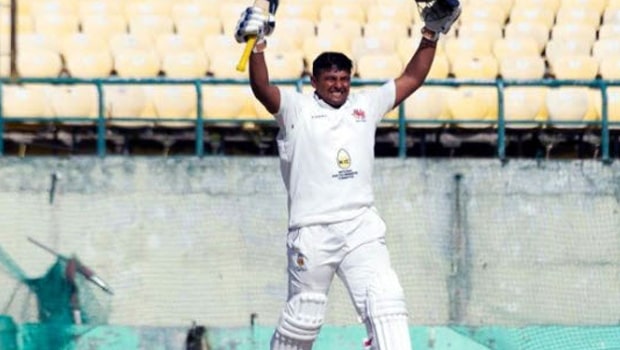 Sarfaraz Khan has been in great form in the Ranji Trophy of late. He grabbed the opportunity created by the absence of Mumbai’s batting stalwarts like Suryakumar Yadav, and Shreyas Iyer, who were on national team duty, with both hands and thus reminded the country about his talent once again.

First, the 22-year-old piled up 301 runs off just 391 deliveries in the round 6 match against Uttar Pradesh and, then, followed it up with yet another scintillating knock of 226 against Himachal Pradesh in the very next round.

Sarfaraz remained unbeaten in both of these knocks and it looked like he was on course to yet another century when Mumbai took on Saurashtra in round 8. However, he was dismissed for a score of just 78 runs this time. Yet, that didn’t stop Sarfaraz from becoming one amongst the batsmen with most runs between two dismissals in first-class cricket history.

He scored 605 runs before getting dismissed.

The youngster became the batsman with the sixth highest aggregate of runs (605) in the list which is led by the likes of KC Ibrahim (709), Graeme Hick (645) and Vijay Merchant (634).

His knock of 301* came at a time when Mumbai found themselves in all sorts of trouble being reduced to 128/4 with their sights on Uttar Pradesh’s mammoth first innings total of 625/8. He went on to stitch together partnerships of 210, 179 and 150 runs with Siddhesh Lad, Aditya Tare and Shams Mulani respectively from there on and thus helped his team in drawing the match from a precarious situation.

His double ton against Himachal Pradesh came in a similar situation as well. Mumbai were reduced to 16 for 3 when Sarfaraz walked out to bat. He played a counterattacking knock of an unbeaten 226 off just 213 deliveries from thereon to dig his team out of trouble. Unfortunately, the match ended as the rest of the days were washed out by rain.

Sarfaraz was finally dismissed on 78 in the match against Saurashtra by off-spinner Kamlesh Makvana. The right-handed batsman couldn’t counter with the turn the delivery extracted off the surface and thus was cleaned up all over.