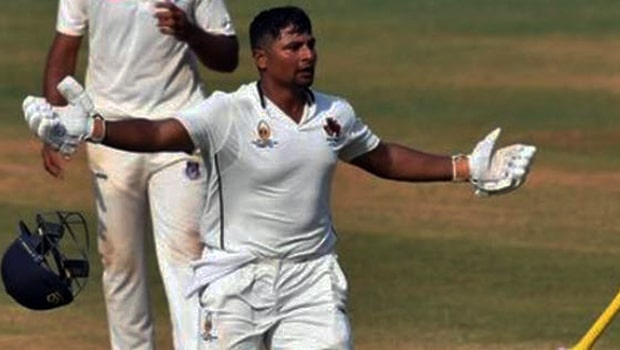 Sarfaraz Khan maintained his run of form when he rescued Mumbai with an unbeaten double century against Himachal Pradesh in their Group B Ranji Trophy game on Monday.

The in-form batsman powered his side to a comfortable 372 for five after a top-order against the hosts.

Having hit an unbeaten triple-hundred in the last game against Uttar Pradesh, 22-year-old Sarfaraz took the host’s attack to cleaners with 32 fours and four sixes during his unbeaten 226-run knock.

After winning the toss, HP exploited the windy conditions at the picturesque HPCA Stadium, grabbing three quick wickets to leave Mumbai reeling at 16 for three.

Hardik Tamore (2) was also ent for an early shower after he was trapped in front of the wicket by KD Singh.

Sarfaraz came in and steadied the ship with a 55-run stand with ‘crisis man’ Siddhesh Lad (20).

Their partnership was broken by medium pacer Raghav Dhawan when crashed the ball into Lad’s middle-stump as Mumbai took lunch at 118/4.

Tare was later caught by Ankit Kalsi as Mumbai lost its fifth wicket on 214. They went on a tea break at 260/5, while Sarfaraz and Shubham Ranjane (44 not out) proceeded with an unbroken 158-run stand before umpires drew stumps early due to bad light after 75 overs.

His second successive triple hundred was no doubt a rare feat in any form of cricket. The young Lad will definitely be in the eyes of the Indian team selectors. It remains unknown if he can provide this run of form in three format crickets.