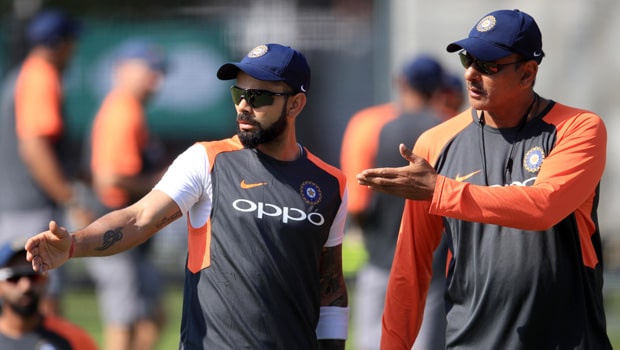 Team India’s bowling coach Bharat Arun reflected on the team’s journey under the leadership of head coach Ravi Shastri right before their last game in charge against Namibia in the T20 World Cup. He also spoke very highly of team captain Virat Kohli who was always on the same page as Shastri. Kohli’s term as captain of the T20I side will also end after the World Cup, a move he had decided to go forward with well in advance.

Speaking to the press before the game against Namibia, Arun said that Ravi Shastri and Virat Kohli wanted to build an all-conquering side that could win games in all conditions. He also mentioned that India had to dig into their fast-bowling reserves and needed to create a disciplined pace attack to complement their spin department.

“See I think, to begin with, Ravi and Virat got together and they wanted to put up a team that could win in all conditions. And in order to do so, it was important that we had a very balanced [squad]. Everybody knows that we had one of the best spin attacks in the world.

“It was also about creating another force that would complement our [spin] bowling and suit in all conditions. So, all of us came together to say, ‘We have enough fast bowlers but we need to create a lot more discipline in their attack and also to make sure they remain fresh throughout.’ That was the only chance of us winning,” said Bharat Arun.

Under Bharat Arun’s tenure as bowling coach, India consistently prioritized their bowling attack and also employed a five-bowler strategy. This reflected best in India’s historic Test victories in England and Australia. Arun also said that both Shastri and Kohli had put considerable weight behind that strategy and the move worked wonders because of their trust and belief as well. The 58-year-old also mentioned that he expects this legacy to continue under new head coach Rahul Dravid.

“The team management and the captain took a very bold step of always playing five bowlers at any given point in time. I think that was the most positive move that happened.

“And that helped us to win three major series abroad – two were back-to-back in Australia and one we came very close to winning [in England]. It hangs in balance for the one Test match that remains. So, I think it’s a combined effort of everybody put together that has created this force and I think this legacy will carry on,” he concluded.