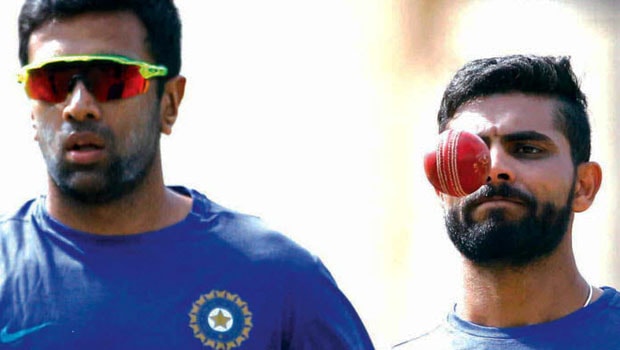 How does Ravindra Jadeja fare against Ravichandran Ashwin in Tests?

There has been a long standing debate around who has been the better player in Test cricket for India – Ravichandran Ashwin or Ravindra Jadeja? Both are similar type of players as they bowl spin and are quite handy with the bat down the order as well. While both players are crucial part of the first team in Tests at home, the case is quite different when India venture into away Tests.

At first, Ashwin used to be the preferred choice ahead of Jadeja in overseas Tests as only one spinner could be accommodated in the XI. However, things have changed quite a bit in the last couple of years. Jadeja has been the preferred player ahead of Ashwin and he has delivered with both bat and ball as well. While a faction of people are happy with Jadeja being preferred, there is another faction who think dropping Ashwin in overseas conditions is totally unfair. So, here we’ll analyze how the two players stack up against each other in terms of their skills and records.

Their overall bowling numbers hardly conclude anything. Jadeja has played far lesser number of matches. Although he has a marginally better average than Ashwin, the latter has a far better strike-rate. We need to analyze their home and away performances to find out the more balanced performer across both home and away conditions.

Table: Home and away breakdown of Ashwin and Jadeja’s bowling numbers

The home-away breakdown of their stats gives a better idea. Jadeja has a better average at home as compared to Ashwin but he takes far more number of deliveries to take a wicket. So, it can be said that Jadeja is more disciplined and depends on his accuracy of line and length to pick wickets. Ashwin, on the other hand, plays a more attacking role.

When they go overseas, both of their numbers deteriorate. While both of their average crosses the 30-mark, Ashwin fares better in away Tests in terms of both average and strike-rate. So, it can be said that Ashwin is the better bowler among the two.

However, to determine their overall impact, we need to weigh their batting abilities as well.

Instead of weighing the overall numbers, we’ll go straight to the home and away breakdown of their batting numbers this time.

Table: Home and away breakdown of Ashwin and Jadeja’s batting numbers

These numbers make it clear that Jadeja is a far better batsman across both conditions than Ashwin. Jadeja’s average is far higher and, at home, he has scored almost the same number of runs as Ashwin and that too in lesser number of innings. It is because of this batting ability that Jadeja has been preferred over Ashwin as a bowling all-rounder in recent times. There is no doubt that Ashwin might be a better bowler but Jadeja is better when all-round ability is considered.