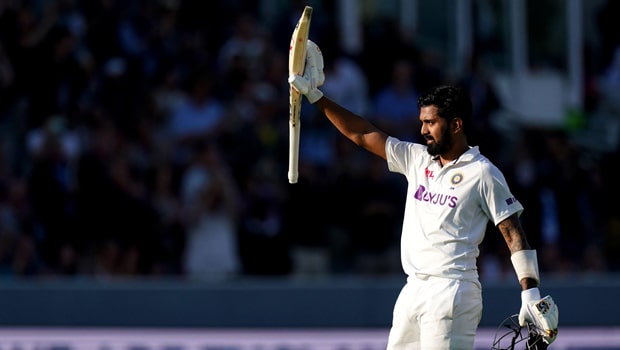 Making his return to the Test side during the tour for the first time since 2018 primarily due to injuries to first-choice openers, KL Rahul displayed his class with some sensational batting across both Tests. He scored 110 across both innings in the first Test and then went on to make a statement with a fine century on Day 1 of the second Test at Lord’s.

Rohit Sharma, who stood at the other end for much of the innings, hailed Rahul’s performance. Sharma said that his 127 not out off 148 deliveries is the best he’s seen KL Rahul bat and went on to heap praise on his patience and discipline.

What was most interesting about Rahul’s innings yesterday was the extremely measured approach he took to get himself settled. He faced 105 deliveries for his first 20 runs. However, following Rohit Sharma’s dismissal, it didn’t take time for him to switch gears automatically and he continued to pile on the misery on English bowlers until Stumps. His innings included 12 boundaries and a six.

“Yeah, it was probably the best I have seen KL bat. I thought he was very much in control from ball 1 till we finished the day. At no given point did it look like he was confused or thinking too much. He was very clear with his plans and when you do that and trust your plans, they definitely work. Today was his day and he really made it count,” Rohit Sharma said in the post-stumps press conference.

With this century, KL Rahul now becomes the second Indian opener after the great Sunil Gavaskar with most hundreds outside Asia. His four tones are overshadowed by the Little Master’s 15. Virender Sehwag also shares the second place with Rahul. The 29-year-old also became only the third Indian opening batsman to register a century at the iconic Lord’s.

Rohit Sharma also looked extremely impressive in the initial part of the match. He scored 83 runs off 126 balls and also shepherded the first half of KL Rahul’s innings. Rohit mentioned that his partnership with Rahul had been going well because both batsmen have a similar mindset.

“Honestly, there was no discussion because KL wasn’t supposed to play the first game, Mayank was. Unfortunately he was hit on the head and was out due to a concussion and then KL stepped in. Only after we went out to bat did we start discussing what we needed to do and things like that.

“Yes, it’s the first time I have opened with KL in Test cricket but I have batted with him a number of times. We know and understand each others’ games and it’s important to keep talking in the middle. It can be a lot lonely out there if you are not communicating. It’s always nice to have a partner who’s willing to communicate and take the game forward. Both of our midsets are pretty similar,” added Rohit Sharma.