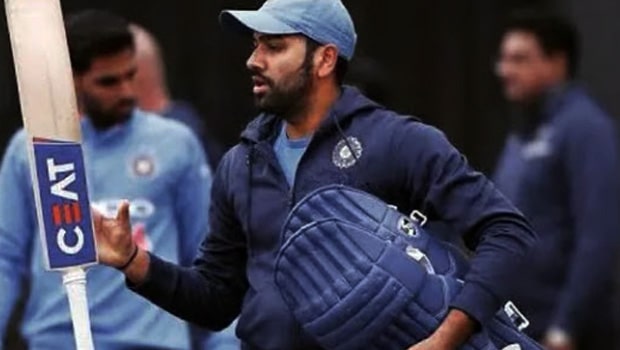 Mumbai Indians skipper Rohit Sharma has returned to training to match fitness after being out with a hamstring injury.

Sharma has been the town’s talk after being omitted by the Indian selectors for the upcoming tour of Australia.

It could be recalled that the opener sustained the hamstring injury during the twin Super Over clash with Kings XI Punjab on October 18.

Not deterred by his omission, the opener is working hard to regain his full fitness for the business end of the Indian Premier League (IPL) in the United Arab Emirates.

According to reliable sources within MI’s camp, the skipper won’t be in the team’s line up for the near next IPL game against Royal Challengers Bangalore at the Sheikh Zayed Cricket Stadium today as he continues working on his game and hamstring muscle to make an early return to the team soon.

A source told ANI that Sharma has been training regularly after he was rested a day after the KXIP game. The source further revealed that he had been involved in the team training as he continues to work on his leg slowly while hitting the nets.

In buttressing his point, he said the skipper before the last game took throwdowns at the ground, which shows that he is making many efforts at regaining full match fitness.

The RCB clash will make it the third game Sharman will miss for MI. Since his absence, Mumbai defeated Chennai Super Kings by ten wickets at the Sharjah Cricket Stadium and lost by eight wickets against Rajasthan Royals on Sunday.

MI is leading the IPL point table with 14 points gathered from 11 games. Knowing the stuff, he is made off; it was shocking to many fans and pundit that Sharma was from the Australia series, which starts on November 27.

It was gathered that the national team physio Nitin Patel had informed the selection committee that the MI skipper would be available between 2-3 weeks. Still, they decided to omit him from the team.

It hoped that his injury status would be monitored as promised by the BCCI medical team.