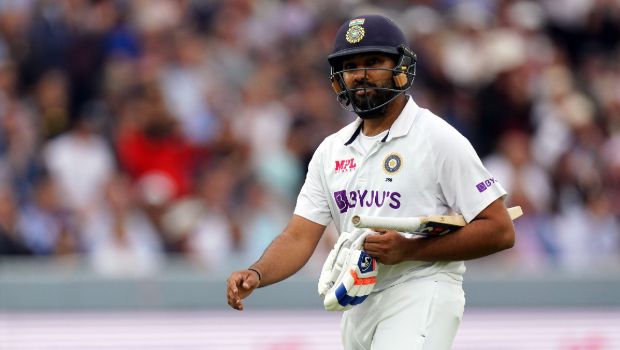 It is always challenging for any team’s Test opener to succeed in tough English conditions and Rohit Sharma had his work cut out on the England tour.

This was the first time when Rohit was opening in Test matches in English conditions and many had doubted his ability to play the new duke ball.

However, Rohit was able to prove his mettle in the challenging conditions as he scored 368 runs in four Test matches at an average of 52.57 and finished as India’s highest run-getter in the truncated Test series.

Rohit revealed how he prepared for bowlers like James Anderson and Stuart Broad, who are always lethal in their own conditions. The Indian talisman said that the gap after the World Test Championship final against New Zealand helped him in his preparation and he gave credit to throwdown specialists – Daya and Raghu – for helping him prepare in the best possible way.

“A lot of credit goes to the preparation that we had. We had 15-20 days to prepare after the WTC (For the England Test series). Having traveled to England so many times, we understand what to expect — from the team, and the conditions. I know what would come at me,” Rohit said on the show Backstage with Boria.

“I trained in that fashion; I trained my mind that James Anderson will hold the new ball and try to swing the ball away from me, and one odd ball will come onto the pad. So how do I prepare for that?”

“Luckily, we have a throwdown guy, Daya, who played a big part in getting my preparation right, along with Vikram, Raghu, and all the others. Throwdown guys are so accurate in executing what’s going to come from the opposition. Raghu is someone who bowls the back of the length, tries to nick the ball around. Daya swings the ball upfront. We’ve got a left-armer as well, from Sri Lanka. All these guys are specifically trained, they know what to do,” he added.

Rohit added that preparation with the throwdown specialists was the real gamechanger for him in his preparation for the England series. The veteran batter revealed that he made a few tweaks in his stance and kept defending and leaving the ball consistently in the practice sessions.

“These guys are the ones who actually I want to give a lot of credit to, for whatever I did in England. I can only talk about myself, but the other guys like KL (Rahul) will probably say the same thing. For me, personally, that was the gamechanger,” told Rohit.

“The 15-20 days I got to prepare in that fashion — keep defending, keep leaving the ball — helped.”

“I changed certain aspects of my stance as well, about how I want to get ready before the ball is delivered. Keeping hands close to the body — while doing that, my wrist hurt very much because I was never used to doing something like that. But I was prepared for it; this was nothing compared to the success or confidence I received,” he further said.

Rohit has now been named as the team’s vice-captain in Test matches.