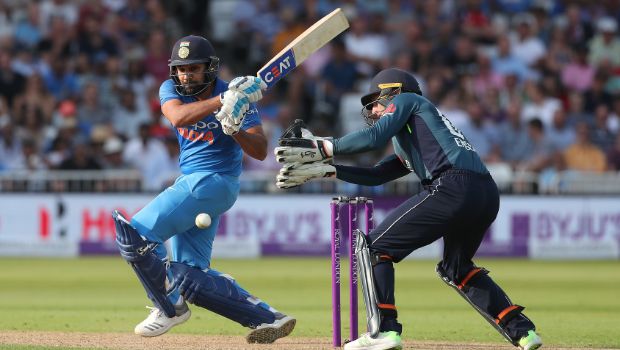 The stylish right-hand batsman was the ICC Men’s ODI Player of the Year, scored 1490 runs at an average of 57.3 and also finally went on to establish himself in India’s Test side.

While some doubters still remain and question his ability in the longest format of the game in away conditions; it must be said that his naysayers are now in the minority, which wasn’t always the case in the past. After all he did become just the sixth Indian to score centuries in both innings of a Test last year besides also scoring his maiden double ton.

His successful return to the Test squad was, of course, long overdue and came on the back of a spectacular year in ODIs. Rohit’s exploits at the World Cup last year, in particular, cannot be undermined. He finished the tournament as a leading run-getter (648) and smashed an unprecedented five centuries along the way – more than any player has managed in a single edition of a World Cup.

The Hitman as he’s fondly known, in fact, hit seven centuries overall last year and seems to have started 2020 in the same vein of form having scored his first ton this year at the expense of Australia earlier in January. His propensity for long knocks has seen him score three double tons in ODIs and was bound to translate into good performances in Tests sooner or later.

That said, a few of his critics who do remain will still point at his lack of runs in testing conditions abroad. This perception of Rohit has followed him for most of his career and with good reason as the numbers below suggests.

However, stats can be deceiving at times and a breakdown of his Test numbers by opponents paints a rather different and interesting picture. The comparison below reveals that while his numbers away aren’t great, his record against New Zealand, South Africa, Sri Lanka and West Indies is rather impressive. While there’s scope for him to improve his performances against Australia and England – who he’s played against in only one Test – saying that he’s not cut out to succeed abroad would be doing him a great disservice.

Lest we forget, the Rohit of the past few years is a very different player to the one who made his Test debut in 2013. The last year especially has been one of great success for him personally as well as collectively. Outshining Virat Kohli isn’t for everyone but that’s exactly what Rohit managed to do to a great extent.

The 2019 World Cup saw Rohit deliver more often than not for India as Virat underwhelmed going by the Indian skipper’s lofty standards. ICC tournaments seem to bring the best out of Rohit, and this is one area where Rohit has consistently outperformed Virat. The past two World Cups have seen Rohit score 978 runs from 17 innings at an average of 65.2, while Kohli has scored 748 runs from the same number of innings at an average of 53.42.

The challenge for Rohit now over the next few years will be to silence his remaining critics who point at his Test numbers. And now that he’s established himself as an opener in Tests for India, it would take a brave man to bet against him doing just that with India set to travel abroad and compete in the ICC World Test Championship over the next couple of years.