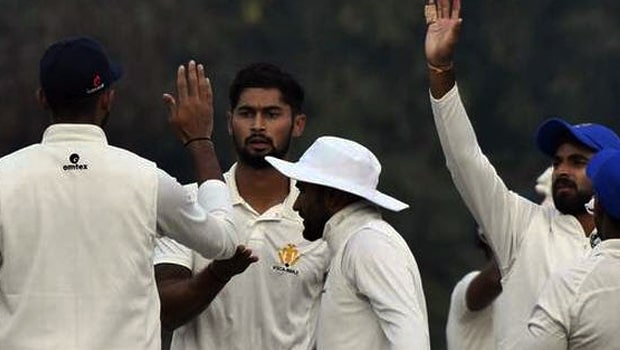 Pacer Ronit More was too much to handle for the Railway as he orchestrated their dramatic collapse, bowling Karnataka to an astonishing 10-wicket victory on the final day of their four-day Group B Ranji Trophy match on Thursday.

After the better part of two days were lost to rain and poor light, Karun Nair’s men, had already won the first innings by 29 runs.

More began to remove the opposing batsmen with superb assistance from fellow pacers Abhimanyu Mithun (3/17) and Prateek Jain (1/28). The pacer ensured that Karnataka got the victory from 30 overs to meet Railways target of 79 in their second essay, leaving the visitors with a victory target of 51 runs.

With the job done by More, openers Rohan Kadam (27) and Devdutt Padikkal overhauled the score as Karnataka bagged seven points from the match to take their tally to 24. With this tally, their chance of making it to the quarterfinals is firm.

Karnataka’s three pacers took the game to their opponent, keeping the ball low, and the pitch offered uneven bounce. This afforded them the opportunity to hit the deck with precision and frustrated the opposition.

Railways’ batsmen couldn’t weather the storm and ended up as sitting ducks. Opener Mrunal Devdhar who had 38 runs, was the only batsman to finish with a double-digit score.

The in-form Prateek Jain continued from where he stopped when he removed opener Ashish Sherawat, who was lured into a forward drive. Sherawat mistimed his shot against the short ball, which gave KV Siddharth a low catch at first slip.

Mithun also trapped Saurabh Singh at the other end with just one run on the board.

With much expected from skipper Arindam Ghosh, Padikkal offered him a lifeline when he grassed a catch at slip.

Karnataka sniffed a chance wen Mahesh Rawat offered an edge to Sharath off More, which left Railways tottering at 20/4.

More quickly removed Harish Tyagi and Dinesh Mor, who poked around for a bit in a bid to salvage a draw.

In his next over, which was the last of the innings, More mopped up Amit Mishra, who flicked a catch to Prateek Jain at midwicket.

The formalities were completed by Kadam and Padikkal in a hurry.