Home » Cricket » SA vs IND 2021: We will miss his abilities: Virat Kohli on Rohit Sharma

SA vs IND 2021: We will miss his abilities: Virat Kohli on Rohit Sharma 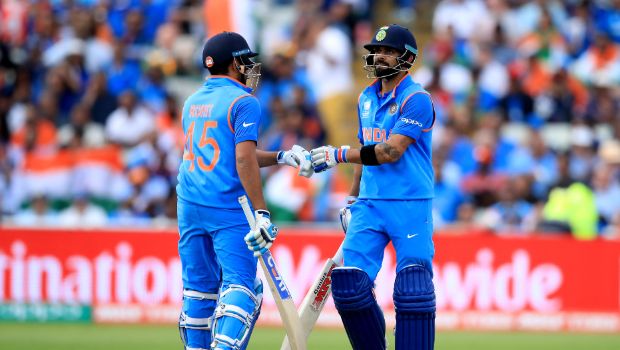 India’s Test captain Virat Kohli stated that the team will miss the services of their talismanic opener, Rohit Sharma, on the upcoming tour of South Africa.

Rohit had grabbed his opportunities on the tour of England as he had scored 368 runs in four Test matches and had delivered the goods in tough conditions.

Rohit has been in sublime form in the recent past and had done a fine job in tough conditions. However, the right-hander has been ruled out of the Test series against South Africa due to a hamstring injury. Thus, Priyank Panchal has been added to the Test squad.

In the absence of Rohit Sharma, Mayank Agarwal and KL Rahul are expected to open the innings for India. Agarwal had scored a fine hundred in the second Test match against New Zealand while KL Rahul had also proven his mettle in the tough English conditions.

“We will miss his abilities a lot. He has proven in England already that he has really worked his Test game out and his opening partnership was very important for us to play in that series the way we did so his experience, his skills… we will miss his qualities. But having said that, it is an opportunity for someone like Mayank and KL to step up and solidify that start for us which we got in the last series and make sure is carried forward in this series as well,” Kohli said on Wednesday.

On the other hand, Ravindra Jadeja has also been ruled out of the South African tour due to a ligament tear. Jadeja has been a consistent performer for the team in the red-ball version, especially with the bat in the last couple of years.

“Jadeja has obviously been a very important player for us. He contributes in all three departments of the game which is invaluable playing especially in overseas conditions. He will obviously be missed but having said that we do have qualities in the side to be able to create the best combination possible for us and still be in situations to win Test matches,” added Kohli.