Home » Cricket » SA vs IND 2022: His angle at the crease was the key to his success – Shaun Pollock on Shardul Thakur

SA vs IND 2022: His angle at the crease was the key to his success – Shaun Pollock on Shardul Thakur 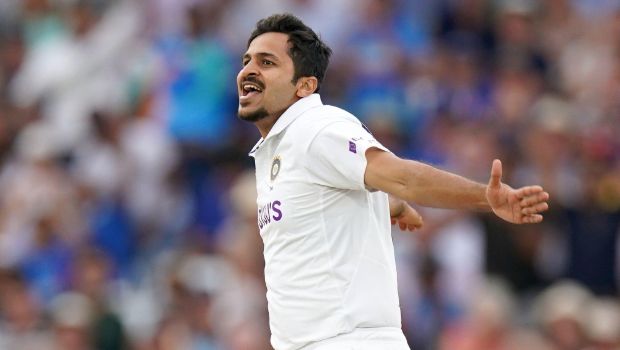 Former South African skipper Shaun Pollock heaped praise on India’s medium-pacer Shardul Thakur after he returned with impressive figures of 7-61 in the first innings of the second Test match at the Wanderers, Johannesburg on Tuesday.

Furthermore, the all-rounder played a key role in skittling out South Africa at 229 runs and thus the home team could only take a lead of 27 runs. In fact, South Africa was in the driver’s seat after Dean Elgar and Keegan Petersen added 74 runs for the second wicket alliance.

However, Thakur struck thrice before the lunch break as he removed Dean Elgar, Keegan Petersen and Rassie van der Dussen to get India back in the contest. Thakur used the angles at the crease with guile as he got the ball to move away from the right-handers while bowling close to the stumps and got the ball to swing back into the right-handers while bowling away from the stumps.

Pollock told Cricbuzz: “There must be a self-belief in #LordThakur (chuckles), with the way he’s performed. And a brilliant 7/61… I think just his angle on the crease was the key to his success here. From wide, he was angling in and getting it to shape away, and then if it didn’t do that, it would sort of nip back and get the batters to play at it.”

Pollock added: “His game plan was pretty good, he didn’t mix it up too much, there was the odd short delivery thrown in but he just kept running in almost like he had this magical or real desire to try and prove a point…”

On the other hand, India’s veteran wicket-keeper batter Dinesh Karthik heaped praise on Shardul Thakur. Karthik added that Thakur has proved his mettle in the domestic circuit while playing for Mumbai.

“I have a special place for him in my heart only because as a domestic player he’s played 60-70 matches for Bombay [Mumbai] which has done phenomenally well… Obviously, he started as the third bowler but went on to become their lead bowler along with Dhawal Kulkarni and did brilliantly well for them. He was the guy who used to pick up wickets early, partnership breaker there as well, so he’s used to this. And just his attitude – I mean, if you just look at him and look at the skills of a Bumrah or a Shami, you go ‘Wow, what’s so special about him?’ But I think his specialty is his self-confidence.”