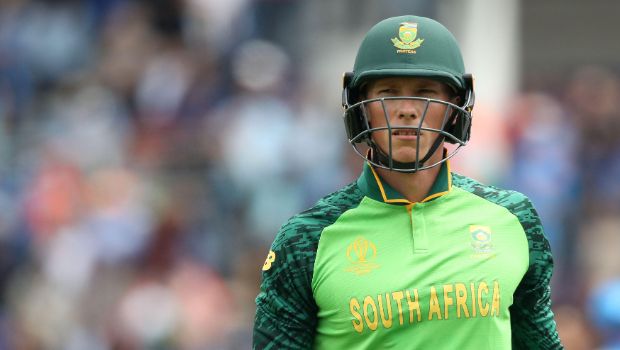 Van der Dussen joined forces with his captain Temba Bavuma when their team was under the cosh at 68-3.

Van der Dussen did struggle against Ravichandran Ashwin in the early stage of his innings and also had the rub of the green on his side as Rishabh Pant shelled a difficult chance. However, the right-hander took the attack against Yuzvendra Chahal and grew in confidence after he scored runs of his sweep and reverse sweep shots.

Temba Bavuma, on the other hand, played a second fiddle, as van der Dussen found boundaries at will. The right-hander completed his maiden ODI century off just 83 balls and finished with an unbeaten knock of 129 runs off just 83 balls while Bavuma scored 110 runs. Thus, South Africa posted a par score of 296 runs in the first ODI after the duo added 210 runs for the four-wicket alliance.

On the other hand, South Africa had chased 240 runs in the second Test while they were able to chase 212 runs in the third Test and van der Dussen had played a key role in both those chases.

Rassie van der Dussen said in the post-match presentation, “The key for me was to keep the intensity and up the intensity. I went in and I knew I had to go to my sweeps and reverse-sweeps and put the pressure back on their spinners. It was important to show intent from the start. We got some momentum and put on a good score. Coming in today, we were under a bit of pressure. You need to stand up as a batter, two high-pressure chases in the Test, we were confident as a group coming into this match. We knew we’d be in a good position if we could post 280+. When Shikhar and Virat were there, they were putting us under a bit of pressure. As soon as we got those two wickets, a new batter needs time to find his feet. Not the ideal last 10 overs, hopefully, we can be more clinical in the future. We’ve been on a long journey with this team. We’ve put a lot of hard work in and had a lot of good chats. I think it’s coming through”.

Rassie van der Dussen scored nine fours and four sixes in his match-winning knock and was awarded the Man of the Match award. South Africa added 51 runs in the final five overs and van der Dussen did the lion share of the scoring in the final overs.

India could only manage 265 runs after their middle-order failed to get going as South Africa won by 31 runs to take a 1-0 lead in the three-match series.