Home » Cricket » SA vs IND 2022: Should have made a place for Suryakumar Yadav – Sanjay Manjrekar

SA vs IND 2022: Should have made a place for Suryakumar Yadav – Sanjay Manjrekar 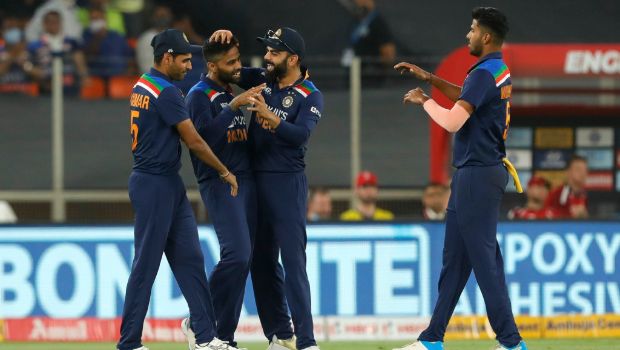 Former Indian batter Sanjay Manjrekar believes India’s think tank should have made a place for Suryakumar Yadav in the first ODI against South Africa at Boland Park, Paarl on Wednesday.

Manjrekar reckons India was playing with a bleak middle-order and it was always going to be difficult for them to chase down more 250 runs as the pitch was on the slow side.

India decided to give maiden ODI cap to Venkatesh Iyer but the rookie batter could only score two runs. Furthermore, Shreyas Iyer and Rishabh Pant also failed to get going after Shikhar Dhawan and Virat Kohli added 92 runs for the second wicket alliance.

Thus, India’s middle order once again could not deliver the goods despite a good start. India went from 138-1 to 188-6 as they lost wickets in a bunch.

Meanwhile, Suryakumar Yadav has played only three ODI matches in his young International career in which he has scored 124 runs at an average of 62. Yadav has been a consistent performer in the IPL for Mumbai Indians and he has done a fine job for five-time champions.

Sanjay Manjrekar said while talking to ESPN Cricinfo, “I’ve maintained that it (India’s middle-order) looked a little short on batting when you have somebody like a Rishabh Pant batting at 5 and a Venky (Venkatesh) Iyer in a very unfamiliar role. You know, for a newcomer to bat down at No. 6 on a pitch that’s going to be dry and getting slow further [was difficult]. There wasn’t much of a threat down the order so I thought they should have made a place for somebody like Suryakumar Yadav… I guess a few little tweaks will have to be done to make sure that the middle looks a little more wholesome.”

The renowned commentator added that India needed either Shikhar Dhawan or Virat Kohli to carry the bat in the run-chase of 297 runs. Manjrekar reckons the tourists lost the game when they allowed the opposition to post a score of more than 250 runs.

“Just far too many runs to chase, especially in a day game where the pitch wasn’t going the get easier for the batters chasing and the ball wasn’t going to get wet because of the dew… There was some hope at the start but somebody had to carry the bat through the innings. Shikhar Dhawan got out after being set, Virat Kohli as well. It was always going to be difficult… I think India lost the game when they allowed the opposition to go beyond 250.”

On the other hand, Shikhar Dhawan made a fine return to the side as he top-scored for the team with 79 runs. However, Dhawan was dismissed against the run of play and it was the turning point of the game as he was well-settled. Manjrekar added that he has always been a big fan of Shikhar Dhawan.

“I’ve always been a huge fan of Shikhar Dhawan… He’s one of the very unique batters I’ve seen who’s got better in the last three or four years of his career and that’s on the wrong side of 30… After a long gap, he came in and played superbly. I thought it was a fantastic innings. I loved the way he took on Marco Jansen, the spinners as well. He looked the part and that’s been Shikhar Dhawan’s story in white-ball cricket in the last two-three years. His IPL game has also changed considerably. Only when he’s there fielding in the deep, you get the realization that this guy’s not getting any younger but when you see him bat – brilliant.”