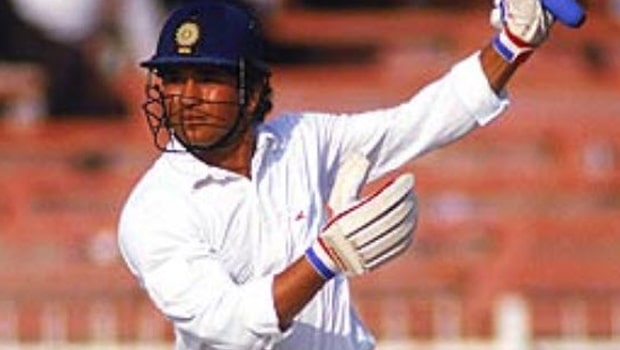 Former Pakistan captain Waqar Younis has stated that legendary Indian batsman Sachin Tendulkar was batting out of the world in the famous 1999 Chennai Test match. Sachin had scored a fine knock of 136 runs against the potent Pakistan bowling line-up which had bowlers like Waqar, Wasim Akram and spin legend Saqlain Mushtaq.

India was in a pickle when they lost five wickets for 82 runs in their run-chase of 271 runs. Subsequently, Sachin Tendulkar stitched a fine alliance of 136 runs with Indian wicket-keeper Nayan Mongia. Sachin was batting at the top of his game and he was taking the game away from the visitors.

Sachin tried to play a big shot against Saqlain Mushtaq but could not time the ball and the catch was taken by Wasim Akram. Waqar added that he didn’t know what Sachin was thinking as the hosts were cruising at that stage.

Sachin was dismissed 17 runs before the target and the Indian team still had three wickets in hand. However, India lost the remaining three wickets for only four runs and lost the match by 12 runs. It was a heartbreak for Sachin Tendulkar, who had got his team so close to the victory but his efforts went in vain.

Meanwhile, it is well known that Sachin was at the peak of his powers during that time and played some breathtaking knocks. Sachin used to demolish the opposition bowling and he went on to play some brilliant knocks for the Indian team.

“I don’t really know, to be honest, what Sachin was thinking at the time. Because they were cruising, it was not an issue, they still had four wickets in hand and they needed, I think, 16 runs,” Waqar said on the greatest rivalry podcast.

“The way he was batting, it was just out of this world. And then in the very next over, I think, to Saqlain Mushtaq, Sachin hit one in the air and that was it. That confidence, that belief started creeping in that now we will not allow them to get those 15-16 runs, whatever was required.

Sachin was dismissed when India’s score was 254 and then the team crumbled like a house of cards to skittle out for 258. Consequently, Pakistan won the nail-biting contest as they were able to dismiss Sachin right on time. Tendulkar was  awarded the Man of the match for his brilliant knock but Pakistan had the last laugh in the thrilling match.

In fact, Saqlain Mushtaq who dismissed Tendulkar in the second innings, recently stated that he would rate Sachin’s 136 at Chennai better than Sehwag’s triple century in Multan.