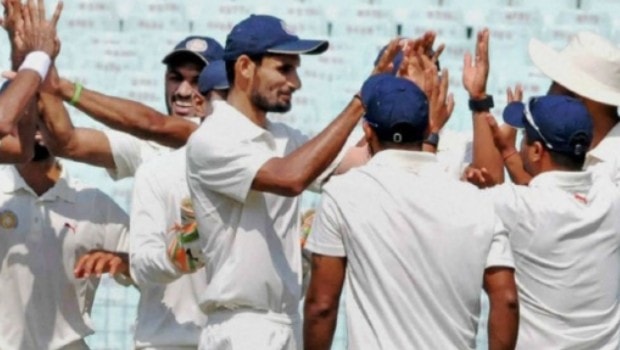 Saurashtra won their maiden Ranji Trophy title when they finished the final day with a lead of 149 runs against Bengal on Friday. The match ended in a stalemate but the home side created history on the basis of first innings lead. This was Saurashtra fourth entry to the final of the Ranji Trophy and they were finally able to breach the final hurdle.

The hosts, who needed four wickets on the last day to put their noses ahead, got off to an ideal start when skipper Jaydev Unadkat plumbed half-centurion Anustup Majumdar in front of the wickets. The right-hander decided to go for the review but it was no avail. Two balls later, Saurashtra got one more wicket to strengthen their grip.

Akash Deep made a school boy error when he didn’t care to get himself back into the crease despite wicket-keeper Avi Barot missing the stumps on the first attempt. Jaydev Unadkat took another shot at the stumps and Deep was lost ‘DEEP’ into his own thoughts.

Mukesh Kumar was then dismissed by Dharmendrasinh Jadeja with Vishvaraj Jadeja taking a good catch at short-leg. The umpire gave the decision in favour of the visitors but it was clear there was a big inside edge when Jaydev Unadkat decided to go for the review. The Saurashtra captain had the final nail in the coffin when he dismissed Ishan Porel and the celebration which followed told the whole story.

Saurashtra had gained a lead of 44 runs and it was a mere formality for their batsmen to finish off the day. There was not even a glimmer of hope for Bengal and if ever there was any, it was put paid by a 38-run opening alliance between Harvik Desai and Avi Barot.

Desai was sent back by Shahbaz Ahmed when a gloved the ball to substitute fielder, Abhishek Raman, at short-leg. Thus, the hosts went to lunch while being ahead by 82 runs.

Vishvaraj Jadeja was dismissed with an innocuous delivery down the leg-side whereas the first innings centurion Arpit Vasavada could only score three runs. Avi Barot was the last man dismissed when he mistimed a full toss from Sudip Chatterjee but it was also the last ball of the day.

Arpit Vasavada was awarded Man of the match for scoring 106 in the first innings.