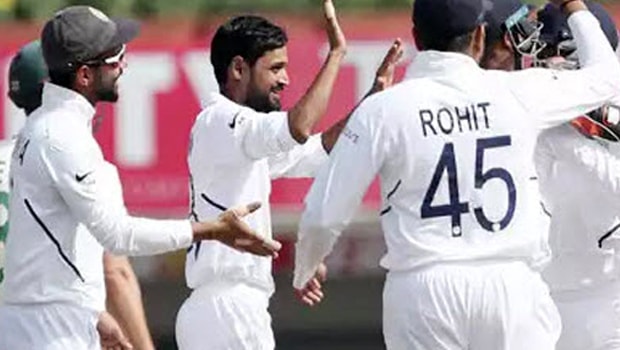 India’s left-arm spinner Shahbaz Nadeem has revealed MS Dhoni’s advice to bowl against Chris Gayle. It is well known that Dhoni has an X-ray machine in his mind and he can predict what the batsman is trying to do. In fact, Dhoni is one of the shrewdest minds in the game and he knows about a particular batsman’s strengths and weaknesses.

As Dhoni has all the experience under his belt, Shahbaz Nadeem approached his Jharkhand teammate and asked him how he should tackle Chris Gayle. It is known that Gayle has an affinity towards the left-arm spinners and he is known to attack them from the get-go. Thus, it is never easy to bowl against Gayle as he can demolish the spinners.

Dhoni advised Nadeem that he should not pitch the ball in Gayle’s arc. The wicket-keeper batsman told the off-spinner he should bowl wide to the southpaw or attack his pads and thus not give him any kind of width to play with.

Nadeem said while talking to Aakash Chopra on his YouTube channel, “Once I was speaking to Mahi bhai when he came to play Vijay Hazare. I asked him if everyone else is fine, but what should be bowled to Gayle as a left-arm spinner. His reply was – ‘First of all, you should not bowl to him at all.'”

“‘But if you need to bowl, try not to give him the ball in his arc. Either bowl outside his range or close to his pads, so that he takes a single.'”

“I asked him if I could bowl a Chinaman to him. He said – ‘If you can bowl that, it is a very good thing. But it should have the pace, it should not be a slow one that he gets the time.’ So that was in mind and then I kept practising.”

Nadeem was able to dismiss Gayle when he represented Delhi Capitals (earlier Delhi Daredevils) with a chinaman delivery and Dhoni’s advice paid dividends for the left-arm spinner. Gayle was going strong in that match as he had scored 48 runs from 37 balls. However, the left-hander miscued a shot against Nadeem and Zaheer Khan, who was leading Delhi at that time took the catch in IPL 2017.

However, that was the solitary occasion when Nadeem dismissed Gayle as he hasn’t played against him since then. The left-arm orthodox has scalped 42 wickets in 64 IPL matches. Nadeem made his Test debut in 2019 against South Africa and took four wickets.