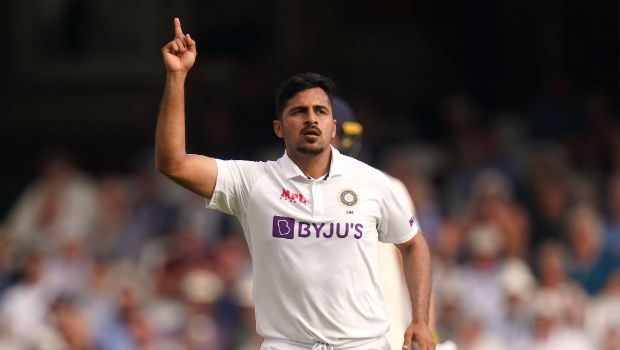 The Indian team has had a difficult time in putting paid to their all-rounder woes who has consistently delivered for them. While India has been blessed with many spin-bowling all-rounders they haven’t got a quality seam bowling all-rounder since Kapil Dev’s retirement.

Hardik Pandya has impressed with his skills but his recent back injury has barred him from Test format. Meanwhile, Shardul Thakur has made an impact in all the four-Test matches he has played thus far.

Thakur was at his absolute best in the Oval Test match against England. The right-hander scored a quickfire knock of 57 runs to propel India’s score to 191 runs in the first innings.

Thakur then scalped the crucial wicket of Ollie Pope, who top-scored for England with 81 runs. The all-rounder once again scored a vital knock of 60 runs in the second innings and then got the wicket of well-settled Rory Burns and the big one of Joe Root on the final day.

Harbhajan Singh told TOI, “See, if he continues to work on his batting and continues to put the hard yards in his bowling, he can solve India’s problem of finding a dependable all-rounder after Kapil Dev. It’s so good to see the way he batted, and it will build his confidence going forward.”

The Turbanator wants Shardul to bat at no. 8 in SENA countries and deliver with the bat for the Indian team. Thakur has shown that he can hit the ground running and he can also play according to the match situation.

“I would like to see him batting at No 8 and scoring runs consistently for Team India, especially in countries like Australia, England, New Zealand and South Africa, where you can’t play two spinners and someone needs to bowl too as your main fast bowler and bat also as your No. 5 to 7 batsmen. Shardul is pretty capable of doing that at No 8, where he can score runs and win games for the team.”

“He has done well for Mumbai in the Ranji Trophy for many years. He’s been a dependable player for them. It’s the right time for him to take his game to the next level, and he’s done exactly that. I don’t think CSK or any other IPL franchise has done wonders to his game. He’s matured with age and time. He’s always been a very good bowler.”

“Whenever I’ve seen him in the Ranji Trophy, (I’ve noted) that he likes to fight. He loves to compete, he wants to win each and every game. Whenever I’ve played with him, he wants to be the center of attraction by doing well with the bat and/or ball. That comes naturally. You can’t inject someone with that quality.”