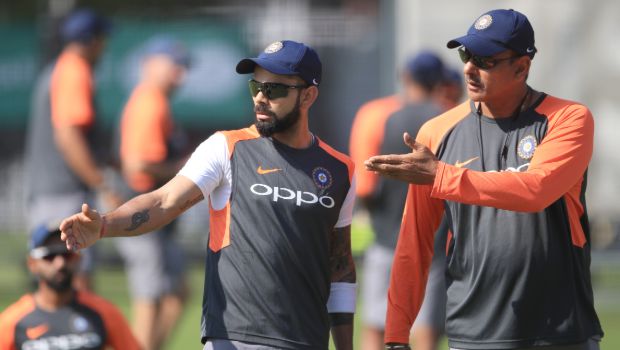 India coach Ravi Shastri has described his skipper, Virat Kohli as the “boss” of Indian cricket.

While noting that for that reason, Kohli is not a player to mess around with, he added that the

the support staff is performing their roles in taking the burden off him.

Kohli, who is a clean batsman of the high class, has been the focal point of India. Since he became the skipper of the side, they had set a world record of 12 Test victories in a row on home soil.

Speaking further, the coach pointed that the skipper is the boss, adding that all the coaching staff does is preparing the team in the best way possible to go out and play what he described as brave, positive, and fearless cricket.

Speaking via Sky Cricket Podcast to former England captains Nasser Hussain, Rob Key, and Michael Atherton, Shastri said pointed out that the captain leads the team from the front while the rest of the staff take off the burden.

While noting that the skipper has to be allowed to perform his roles without distraction in the middle, the coach said he sets the tone because he is encouraged to do so. So, he is, therefore, the showrunner for the team.

Shastri became India’s head coach in 2017. Speaking on the team’s success, which took them to the top spot in the ICC ranking, Shastri attributed this to Kohli, adding that he is a relentless focused and his teammates copied his fitness level. This is why he said the skipper doesn’t mess around because his leadership quality came from the top of his fitness.

Hr revealed that the skipper is usually determined to be the fittest player in the world whenever he wants to play a game. This, he said, will give him the edge when competing against the best in all conditions and formats. So, he allows his body goes through a lot of rigour.

While noting that Kohli, in recent years, remains one of the few regulars Indian players who have played almost all formats non stop.

The coach believes that the secret behind this is not just the training but his diet as well.