Home » Cricket » SL vs IND 2021: Prithvi Shaw’s knock was massive, shouldn’t put pressure on him to get hundreds – Sanjay Manjrekar

SL vs IND 2021: Prithvi Shaw’s knock was massive, shouldn’t put pressure on him to get hundreds – Sanjay Manjrekar 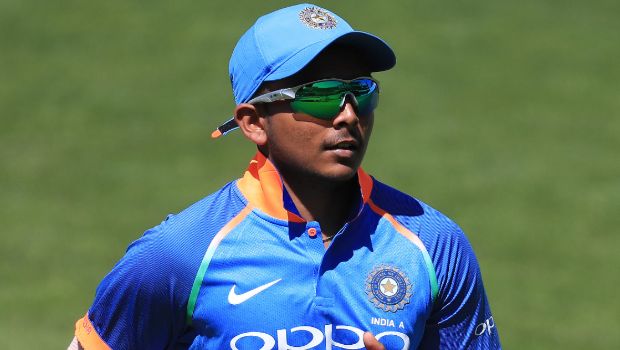 Former Indian batsman Sanjay Manjrekar believes Prithvi Shaw’s knock was massive in the first ODI against Sri Lanka and we shouldn’t put pressure on him to get hundreds.

Shaw was able to hit the ground running against the Island nation and scored at a rapid pace to set the tone of the run-chase.

Shaw scored a blistering knock of 43 runs off just 24 balls as he took the attack on the opposition bowlers from the get-go. The right-hander was also awarded the Player of the match for his innings.

Meanwhile, Shaw is known to bat in an aggressive manner and he can take the game away from the opposition in a jiffy with his blistering batting.

On the other hand, Shaw could have batted with more maturity as he went on to attack Dhananjaya de Silva on the first ball he faced but mistimed his shot and holed out to long-on. Shaw was hit on the head by a bouncer from Dushmantha Chameera in the previous over and he also admitted that he lost his focus after that.

“I hope we don’t, typically like we do in India, put pressure on a young player, saying he has got to get a hundred,” Manjrekar told Sony Sports.

“That 40 (43) he got today put India in a winning position after that; India wasn’t going to lose even if they tried. “I am happy with him getting 40s and 50s at the strike rate, provided there is enough batting after that. And it seemed like he wasn’t looking to play that way, but it was just happening. Ishan Kishan played a little differently, bordering on being frenetic.”

Manjrekar added that Shaw will eventually get the big scores and we shouldn’t put the pressure on the youngster to convert his starts into substantial scores.

“Eventually, he will start getting the big scores, but I don’t think the pressure should be put on him straight away that he has got to convert his starts into hundreds. Getting a hundred in ODI cricket, if you’re a good player batting at the top, you get hundreds. But winning is important.

“The impact of Prithvi Shaw’s innings, India chased down the target of 263 with 13.2 overs to spare. That’s a statement,” Manjrekar added.

The second ODI will be played at the same venue on Tuesday.