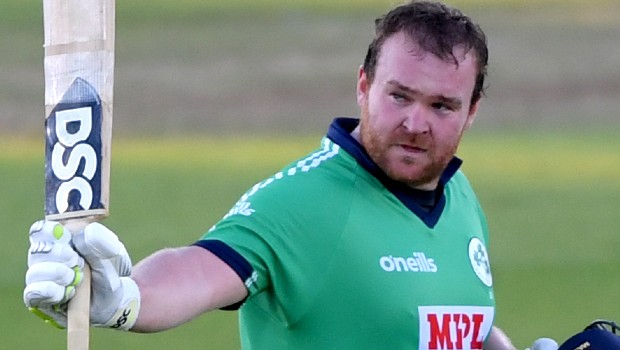 The series was done and dusted as England had taken an unassailable lead of 2-0 but Ireland had all to play for as 10 points were for grab in the ODI super league. A fine alliance between experienced batsman Paul Stirling and Andrew Balbirnie helped Ireland stun England by seven wickets in the final match of the three-match series.

Stirling and Balbirnie both scored hundreds after England posted a competitive total of 328 runs. However, the finishing touches was added by experienced Kevin O’Brien and Harry Tector as they scored 21 and 29 runs respectively to get their team over the line.

Meanwhile, Stirling was able to hit the ground running and played with freedom. The veteran right-hander kept finding the boundaries and thus always kept his team in the run-chase. Ireland captain Andrew Balbirnie joined forces with Paul Stirling when the team lost their first wicket with 50 runs added on the board.

The Men in Green needed a big partnership and Stirling and Balbirnie provided the exactly the same as they put on 214 runs for the second wicket. The Ireland opener, Stirling kept attacking Adil Rashid and scored 94 out of his 142 runs on the leg-side. Stirling scored his ninth ODI hundred whereas Balbirnie registered his fifth ODI ton as they got Ireland in a commanding position.

However, England was not up to the mark in the field as they shelled three catches, including two of Stirling, who went on to punish them.

Earlier, England found themselves in trouble as they lost their openers Jason Roy and Jonny Bairstow cheaply. However, England captain Eoin Morgan and Tom Banton added 144 runs for the fourth wicket to get the hosts’ innings on the right track. Morgan scored his 14 ODI hundred whereas Banton also scored a fine half-century.

However, both of them were dismissed in quick succession and then the wickets of Moeen Ali and the in-form Sam Billings left England tottering at 216-7. David Willey continued to impress with the bat as he scored a fine fifty whereas an unbeaten 38 from Tom Curran took England to a fighting score of 328 runs, but it wasn’t enough in the end.