Home » Cricket » Stuart Broad – Proves his worth for England

Stuart Broad – Proves his worth for England 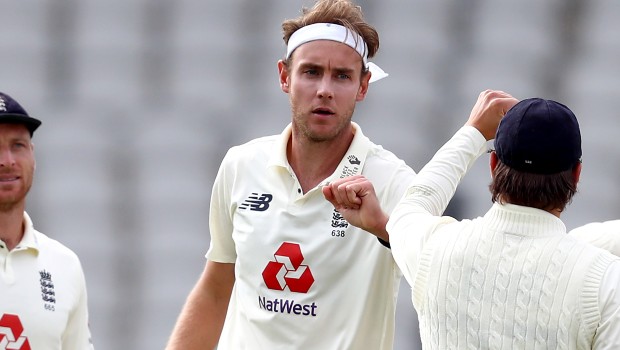 If England is still alive in the ongoing Test series against the West Indies, a lot of credit goes to Stuart Broad. The hosts were staring down the barrel of the gun when the visitors were going strong at 242-4 and it looked that the match was going in a direction of easy draw. However, the 34-year old Stuart Broad, who was gutted and disappointed after being dropped from the first Test at Ageas Bowl, was able to turn the tide.

Broad was wicketless in his first 19 overs and England was desperate for the wickets. Joe Root took the new ball as soon as it was available and handed it over to his most experienced seamer in the final XI – Stuart Broad to do the job.

Broad didn’t disappoint as he scalped three wickets and proved what he has been bringing to the table for England in the last decade. The lanky pacer first plumbed a well-settled Shamarh Brooks in front of the wickets. Broad was confident as soon as he rapped Brooks on the pads that he didn’t even care to look back for the umpire’s decision.

Broad now had the impetus and he was able to breathe down the neck of the West Indies bowlers with the new ball. The veteran then went past the defence of the visitors’ Southampton triumph hero, Jermaine Blackwood. In his next over, he accounted for Shane Dowrich, again trapping him in front of the stumps and not bothering to look back at the umpire. Albeit, Dowrich reviewed but the DRS could not save him.

Broad took three wickets in three overs and there was a spring in his stride. After keeping England alive in the Test series, Broad stated that he wants to emulate the success of his long bowling partner, James Anderson.

“I think sometimes I get put in an older category than I am,” Broad told reporters. “Jimmy has taken around 130 Test wickets since he was my age, why can’t I do the same? I’m hungry, my fitness levels are good. Why not try and emulate what Jimmy has done and play to his age? I feel I can. Today proved that again. When I set goals it makes me hungry to achieve them.”

Broad added that he wants to once again bowl with James Anderson and he is hopeful that both of them once again get a chance in the final XI of the side and if they don’t, he would be a tad surprised.

“I want to play with Jimmy again and hope he feels the same. We complement each other and create a lot of pressure together. When our paths cross again might depend on workloads but I hope we play together this summer and would be surprised if we don’t.”

England currently lead by 219 runs and they would push for the win on the final day.