Sundar helps Tamil Nadu to an eight-wicket win over Jharkhand 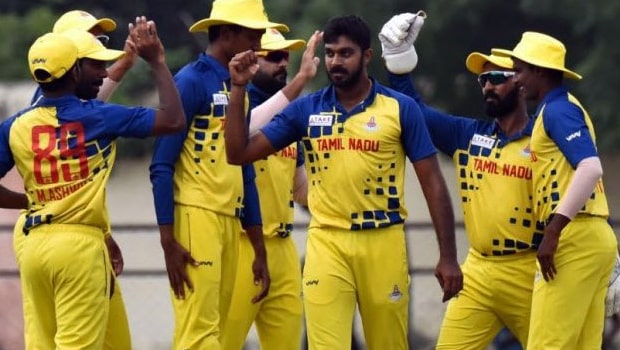 Washington Sundar and M Siddharth were in top form against Jharkhand in their last Super League match of the Syed Mushtaq Ali Trophy T20 tournament on Wednesday, winning the game by eight wickets.

The duo was too much for their opponent as they ran through the Jharkhand batting lineup, eliminating them for a paltry 85, which Tamil Nadu later chased down in 13.5 overs. Jharkhand suffered the first blow, having decided to bat first. The off-spinner Sundar (3-10) sent the skipper, Saurabh Tiwary, for an early shower.

While Tiwary (24 off 27 balls) and wicket-keeper Sumit Kumar (19 off 25 balls) showed some fight, the rest of the Jharkhand batsmen fell like a pack of cards in the crucial game.

As Jharkhand was reeling at 29-3 and their innings was not really up to expectations, Tamil Nadu was picking up wickets at regular intervals. Tamil’s spinners, who have been delivering for their captain, Dinesh Karthik, didn’t disappoint on Wednesday at the CB Patel ground.

Tamil Nadu began the chase on a horrendous note, after losing in-form opener C Hari Nishaanth (7) early. Although, they also struggled at 35-2 when Jharkhand grabbed the wicket of Shahrukh Khan (24 off 28 balls).

Sundar (38 not out off 22 balls) took away the game from Jharkhand after promoting up the order, with his whirlwind knock. The left-handed batsman and right-arm off-spinner smashed three towering sixes. He also had a match-winning unbroken 51-run stand with skipper Karthik (13 not out) to steer the side to victory.

With this feat, Sundar will still be proud to help his team come back to a win, having bowled well in the tournament. Having been unlucky not to get a wicket in the first three matches, he changed the narrative on Wednesday.

Now in the last four of the Syed Mushtaq Ali tournament, their next opponent will have to be wary of Washington Sundar and M Siddharth.