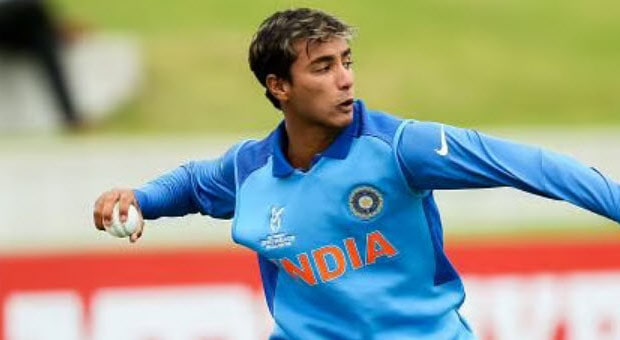 Abhishek Sharma was on fire on Thursday against Railways as his maiden T20 century powered Punjab to a comprehensive 117-run win.

The 20-year-old smashed the Railways bowlers to almost all parts of the ground as he recorded a score of 107 in just 62 balls, an innings which consisted of 5 fours and 9 sixes.

Abhishek also shared a 129-run opening stand with Prabhsimran Singh, who also impressed with an individual contribution of 63 in just 39 deliveries. The young wicketkeeper-batsman smashed 6 sixes on the way to his half-century.

Their fabulous knocks helped Punjab in posting a massive total of 200/4 in their quota of 20 overs. Dhrushant Soni was the pick of the Railways bowlers as he registered figures of 2/29 in his four overs.

The Railways batsmen couldn’t do much to chase the target down. In fact, they looked all at sea against the Punjab bowlers as they got bundled out for just 83 runs.

It was Sandeep Sharma who gave Punjab their first breakthrough and that too in the very first over of the innings. After that, Arshdeep Singh and Harpreet Brar completely ran through the Railways batting lineup as they registered bowling figures of 4-0-16-3 and 4-0-22-4 respectively.

Leg-spinner Mayank Markande also impressed as he picked up two wickets for just 13 runs. As a result, Punjab bowled Railways out inside just 18 overs to seal a victory by a massive margin of 117 runs.

This was Railways’ first defeat of the season. They had won both of their two matches prior to this game. Punjab, on the other hand, won their third consecutive game and thus they find themselves at the top of the Elite Group A table with 12 points to their name.