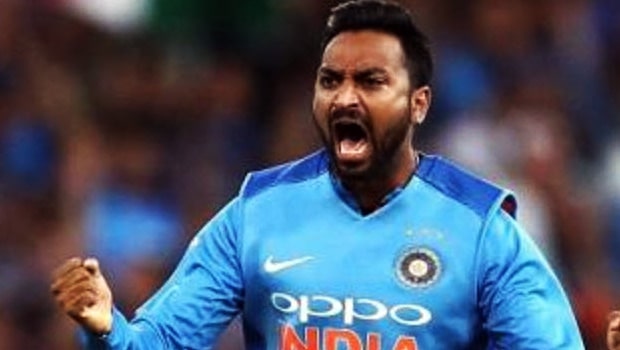 Krunal Pandya was the standout performer for Baroda on Sunday as his all-round exploits propelled his team to a thrilling five-run win against Uttarakhand.

The 29-year-old not only smashed 76 runs off just 42 deliveries but also registered bowling figures of 2/33 in his four overs.

He walked out to the crease as early as the fifth over with his side in a tricky position, with the score reading 27/2. But he went on the attack straightaway as he smashed almost everything in his sight to the boundary.

Krunal’s knock was laced with five sixes and an equal number of fours and it helped Baroda to a competitive total of 168/7 in their quota of 20 overs. He was ably supported by Smit Patel, who scored 41 off 30 deliveries, from the other end.

Baroda started off well with the ball as they reduced Uttarakhand to 11/2 inside the first three overs and Krunal tightened the screws further as he sent Karn Veer Kaushal back to the pavilion in the fifth over of the innings.

He came back to pick up the wicket of Saurabh Rawat in the seventh over of the innings and reduced Uttarakhand further to 41/4. It seemed to be all over for them by the 12th over, as they found themselves at 67/5.

However, Dikshanshu Negi and Kunal Chandela showed tremendous fighting spirit as they put on a 79-run stand for the sixth wicket. Chandela got dismissed for 48(26) on the penultimate delivery of the 19th over and Negi remained unbeaten on 77 off 57 deliveries, but Uttarakhand still found themselves six runs short of the target.

Atit Sheth also picked up two wickets for Baroda whereas Chintal Gandhi registered economical figures of 1/26 off his four overs as well. For Uttarakhand, A Madhwal was the pick of the bowlers as he registered figures of 3/16 in his four overs. Girish Rauturi also returned with good figures of 4-0-34-3.