Syed Mushtaq Ali T20: Padikkal turns the heat on with a breathtaking century 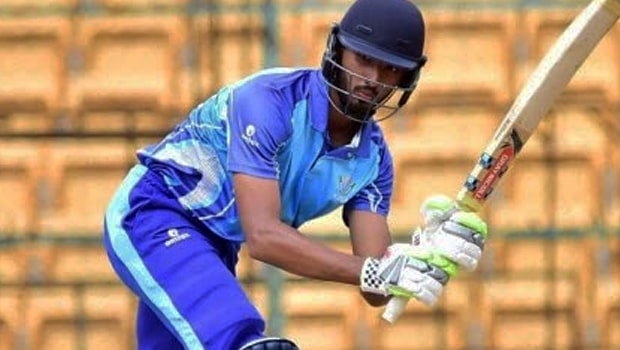 The Indian cricket fans saw yet another Indian batting prodigy in action on Monday as a 19-year-old Devdutt Padikkal smashed a breathtaking hundred to chase down a target of 185 runs for Karnataka in their Syed Mushtaq Ali T20 Trophy game against Andhra.

Padikkal played a breathtaking knock of an unbeaten 122 off just 60 deliveries after walking out to bat at No.4 with his team reeling on a score of 7 for 2. He stitched a 63-run partnership for the third-wicket with Krishnappa Gowtham to dig Karnataka out of trouble. But it was all Padikkal-show after Gowtham was dismissed for a 17-ball knock of 35 runs. The left-handed batsman smashed the Andhra bowlers left, right and centre and, thus, hit them for 13 fours and seven sixes.

If we read the contributions from the batsmen at the other end– Karun Nair (3 off 6), Shreyas Gopal (11 off 15) and Praveen Dubey (13* off 9)– we can understand how Padikkal dominated the proceedings from one end. In fact, he scored 64.55% of the total runs scored by Karnataka during the chase.

Padikkal is now averaging 180 after just three matches in this tournament. He scored an unbeaten 53 off just 33 deliveries in his debut T20 match against Uttarakhand three days back as well.

The Kerala-born batsman was the highest run-scorer during the recently concluded Vijay Hazare Trophy too. Padikkal scored 609 runs in 11 innings during the tournament at an excellent average of 67.66. These runs included seven scores of fifty or more, two of which were converted into hundreds.

Padikkal would be eager to carry his superb form forward. He was already bought by Bangalore in the Indian T20 League Auction last year but did not get to play any game. However, such consistent performances this season put him in good stead to get some matches under his belt during the League next year.