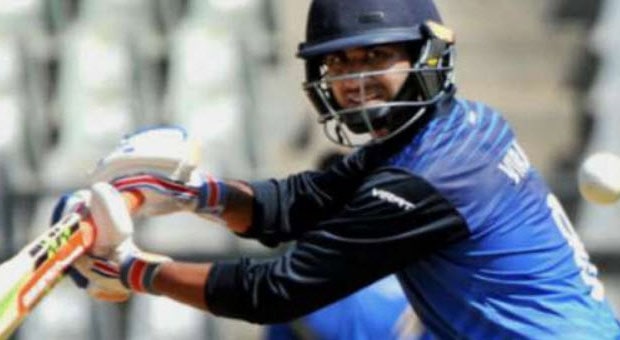 Jharkhand brought up their first win of the Syed Mushtaq Ali T20 season on Thursday as they registered a 51-run win over Assam, riding on Virat Singh’s maiden T20 century.

The 23-year-old walked out to the crease when Jharkhand lost their first wicket, Anand Singh, just in the second delivery of the match. Virat took full control of the proceedings after that as he made his way to an innings of 103* in just 53 deliveries.

Virat’s knock consisted of 13 delightful boundaries and three huge sixes as well. He shared a 81-run stand for the second wicket with Ishan Kishan and then he went on to add another 114 runs with the fourth wicket with Saurabh Tiwary, who made a valuable contribution of 57(33) as well.

He contributed immensely to both of these stands but played a second fiddle in his 38-run partnership for the fourth wicket with Kumar Deobrat, who remained unbeaten on 31 in just 12 balls.

Their contributions helped Jharkhand in posting a massive total of 233/3 in their quota of 20 overs.

Assam, in response, tried their best but the target was always going to be difficult for them. Riyan Parag, who made 67 in just 38 deliveries with the help of 7 sixes, and Pallavkumar Das (46 in 28 balls) tried hard but their efforts went in vain. They could muster up a total of 182/7 in the end, thus falling short of Jharkhand’s total by 51 runs.

As far as the Jharkhand bowlers are considered, Monu Kumar was the pick of them as he registered figures of 4-0-23-3. This win helped Jharkhand in rising to the fourth spot in Elite Group B and they will be eager to carry the momentum forward into the next game.