Home » Cricket » T.Natarajan could be an X-factor in T20 World Cup for India – VVS Laxman

T.Natarajan could be an X-factor in T20 World Cup for India – VVS Laxman 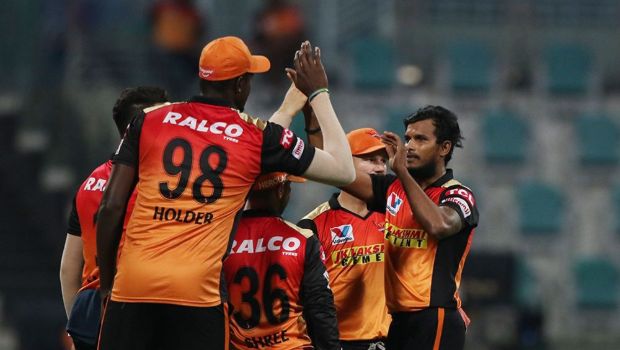 Former Indian batsman and Sunrisers Hyderabad mentor VVS Laxman reckons T Natarajan could be an X-factor in the T20 World Cup for the Indian team in 2021.

Natarajan was able to impress with his skills in the recently concluded Indian Premier League while playing for Sunrisers Hyderabad.

Laxman has observed Natarajan from close corners in SRH and the left-arm pacer has impressed with his skills to execute the yorkers. Natarajan was right on the money in the IPL and he was able to deliver the goods in the death overs. SRH pack leader Bhuvneshwar Kumar was ruled out due to hip injury but Natarajan was able to step up his game.

Meanwhile, the fast bowler from Tamil Nadu scalped 16 wickets in 16 IPL matches at an average of 31.50 in IPL 2020. SRH skipper David Warner had heaped huge praise on Natarajan and stated that he was one of the biggest finds for the franchise in this season.

On the other hand, Natarajan also received his maiden call-up in the T20I squad for the series against Australia after Varun Chakravarthy was ruled out due to shoulder injury.

It is believed that Natarajan can make a lethal partnership with Jasprit Bumrah, who is well known for his accurate yorkers. The likes of Mohammed Shami and Navdeep Saini have also impressed with their skills but Natarajan can be a X-factor for the Indian team given he is a left-armer.

“With the T20 World Cup scheduled next year – if you look at the Indian team, it requires someone good at the death. It is great to see the likes of Mohammed Shami and Navdeep Saini bowl with such confidence in the death. Natarajan being a left-armer will be the X-factor,” Laxman told Sportstar.

Natarajan has made a name for himself for his brilliant yorkers but Laxman revealed that the fast bowler has many tricks up his sleeve. Laxman added that the southpaw pacer can surprise the batsman with a sharp bouncer and also has a good slower delivery, which he didn’t use much in the IPL.

“Natarajan was always known for those yorkers – even in the TNPL. But, I must say he got a lot of variations which he didn’t use in the IPL. He has a sharp bouncer, slower one, off-cutter and has the wicket taking ability with the new ball,” Laxman explained.

Natarajan has scalped 18 wickets in 22 IPL matches and he will look to continue the good show. There are good chances that Natarajan can make his national debut against Australia. The first T20I will be played at the Manuka Oval, Canberra from December 4.