Home » Cricket » T Natarajan has been the find for India on this tour: Glenn McGrath

T Natarajan has been the find for India on this tour: Glenn McGrath 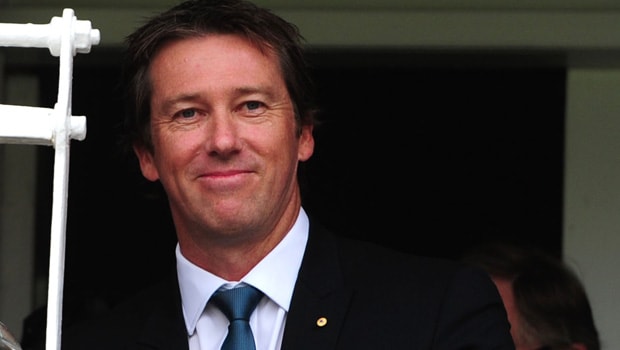 Legendary Australian pacer Glenn McGrath recently named T Natarajan as India’s find on this tour of Australia. The left-arm pacer made his ODI and T20I debut on this tour and India are yet to lose since he made his way into the Playing XI.

While Natarajan registered bowling figures of 2/70 on his ODI debut at Canberra, he has followed up with far better figures of 3/30 and 2/20 in the two T20Is in Canberra and Sydney respectively.

“Was very impressed with Natarajan. He’s definitely the find of this tour for India, hopefully, he continues,” McGrath said during commentary in the 2nd T20I between India and Australia on Sunday.

The former Australia pacer also revealed that he had worked with Natarajan at the MRF pace academy in India a few years back and he is very happy to see how the seamer has grown over the years.

Natarajan was initially picked as a net bowler for this tour after an impressive performance for Sunrisers Hyderabad in the IPL 2020 season. However, a late injury to Varun Chakravarthy pushed his name into the T20I and ODI squads. Natarajan is now the highest wicket-taker in this T20I series having picked up five wickets in just two matches, at an excellent average of 10.00.

The 29-year-old was the pick of the bowlers on Sunday, at a venue which seemed like a minefield for the bowlers. Natarajan not only claimed the wickets of D’Arcy Short and Moises Henriques but also maintained an economy rate of just 5.00. His superb spell helped India to seal the series with one match still to go.

Natarajan was in a rich vein of form in the IPL. He claimed 16 wickets for the Sunrisers in an equal number of matches and thus helped them in making it to the playoffs. He has shown exceptional skills in terms of bowling Yorkers in his career thus far but he has been improving his overall skills as a bowler with every match.

India will take on Australia in the third, and final, T20I of the series at the SCG on Tuesday, and Natarajan will be eager to come up with a good performance once again.