T20 World Cup 2021: A big part of our game is using spin bowlers in the middle overs – Ish Sodhi 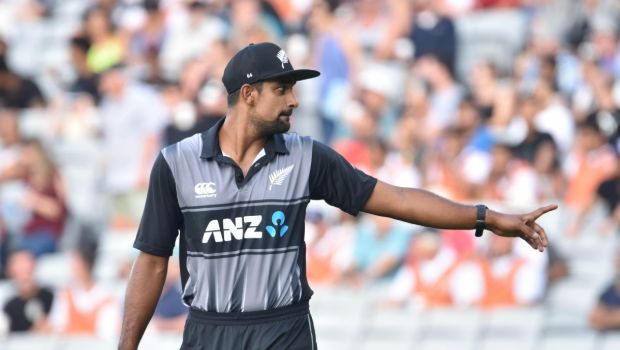 New Zealand spinner Ish Sodhi admitted that a big part of their game is using spinners throughout the middle overs to put pressure on the opposition.

The Kiwis registered their first win of the T20 World Cup as they defeated India by eight wickets at the Dubai International Cricket Stadium on Sunday.

In fact, the early damage was once again done by the New Zealand fast bowlers as Trent Boult dismissed Ishan Kishan, who replaced Suryakumar Yadav and Tim Southee sent back KL Rahul.

Subsequently, India was put on the back foot as they lost two early wickets in the powerplay overs. Ish Sodhi then got the big wickets of Rohit Sharma and Virat Kohli to put his team right on top. Furthermore, the leg-spinner conceded 17 runs in his quota of four overs and thus kept the scoring rate in check.

On the other hand, Mitchell Santner also bowled a tight spell as he conceded only 15 runs in his four overs. Thus, the Kiwis spinners gave away only 32 runs in the eight overs they bowled collectively. Moreover, Adam Milne also dismissed Rishabh Pant in the middle overs.

Trent Boult was once again sensational as he returned with impressive figures of 3-20 in his four overs and breathed down the neck of the opposition batters.

Ish Sodhi was awarded the Player of the Match for his performance and he was able to deliver for the Kiwis in a big match.

Sodhi said in the post-match presentation, “I am usually big on pre-match prep, with this bubble life we haven’t been able to see the ground until the day we come to the ground. The wicket here was one we had to adapt to pretty quickly. It was very different to what we played in Sharjah. The boundary sizes were very different. A big part of our game is using the spin bowlers in the middle”.

”It was set up by the powerplay bowlers. Tim Southee getting that wicket late in the powerplay was massive for us and allowed us to do our job through the middle. We had a tough loss against Pakistan, it was hard not to think this is a really big game. Coming into the game we wanted to play as good a game we possibly could. To play the way we did tonight is one to definitely celebrate”.

New Zealand will next face Scotland at Dubai International Cricket Stadium on Wednesday.