Home » Cricket » T20 World Cup 2021: Aim is to qualify for the semifinals and make our country proud: Rashid Khan

T20 World Cup 2021: Aim is to qualify for the semifinals and make our country proud: Rashid Khan 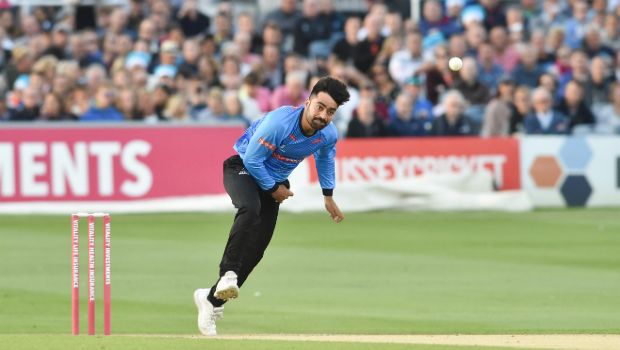 Afghanistan talisman spinner Rashid Khan has stated that the aim is to qualify for the semifinals of the ongoing T20 World Cup 2021 and make his country proud.

The Afghan team made a perfect start to their campaign as they defeated Scotland by a gargantuan margin of 130 runs after they posted 190 on the board and skittled out the opposition for a meager score of 60.

Afghanistan has a lot of match-winners in their team and they have the skills to upset any team on their given team. The Mohammad Nabi-led team has a good T20 team and they have spinners like Rashid Khan and Mujeeb Ur Rahman who can bamboozle the opposition with their wizardry.

“What is in our hand is to play the five games of this group stage and try to qualify to the semi-finals and make the country proud,” Rashid said. “…what’s going to happen in the future, that will come with time,” added the 23-year-old.

“If we have so many things on our mind, that might affect our performance, and the fans will be upset when you don’t perform as a team.”

On the other hand, Cricket Australia had threatened to cancel the one-off Test against Afghanistan if the Taliban doesn’t allow women to participate in sports. Rashid added that their entire focus is on the ongoing T20 World Cup and they want to go all the way in the T20I showpiece.

“To be honest, at the moment, we don’t have anything in mind,” Rashid, Afghan cricket’s brightest star, said ahead of Friday’s Super 12 Group II match against Pakistan.

Afghanistan will play their second match against Pakistan on Friday.