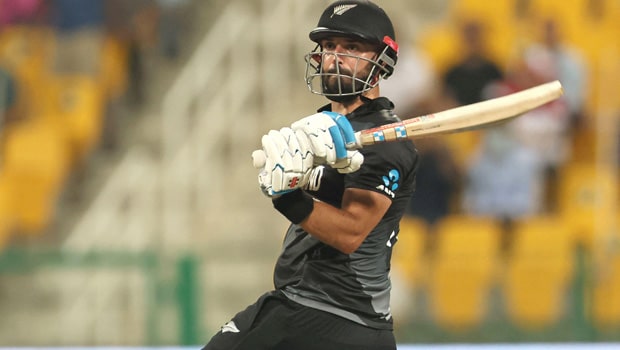 Former New Zealand fast bowler and now a commentator Simon Doull compared Daryl Mitchell with MS Dhoni after the Kiwis opener took his team over the line by five wickets at the Sheikh Zayed Stadium, Abu Dhabi on Wednesday against England. The right-hander scored a match-winning knock of 72 runs off just 47 balls to help his team secure their maiden T20 World Cup final berth.

Like MS Dhoni, Daryl Mitchell took the match deep to give a chance to his team to chase down the target of 167 runs. In fact, Mitchell was not able to find his timing in the initial phase of his innings but he didn’t throw his wicket away and batted till the end to add the finishing touches.

New Zealand needed 20 runs in the final two overs after a fine cameo from James Neesham. Mitchell scored 19 out of those 20 runs in the penultimate over of the innings, which was bowled by Chris Woakes.

“The great MS Dhoni, the great finisher once said to me that the longer you bat the deeper you take the game, the more worried is the opposition and its bowlers,” Doull said on air during the commentary.

“That is what Daryl Mitchell has done here tonight. He saw the first two New Zealand wickets go down cheaply but ensured he batted through, and here is taking his team closer to a place in the final,” Doull added.

Meanwhile, it is well known that former Indian skipper MS Dhoni was one of the best finishers of his time and took India over the line on many occasions with his guile batting.

On the other hand, Daryl Mitchell showed his class and batted at the top of his game to deliver the goods for the team. Kane Williamson also heaped praise on the opener and stated he showed the right character in a big game.

Mitchell had also scored a fine knock of 49 runs against India in the Super 12 stage. The 30-year old from Hamilton will look to continue his good form in the all-important final of the T20I World Cup, which will be played on Sunday.