Home » Cricket » T20 World Cup 2021: I have hardly played any cricket – David Warner on talk regarding his form

T20 World Cup 2021: I have hardly played any cricket – David Warner on talk regarding his form 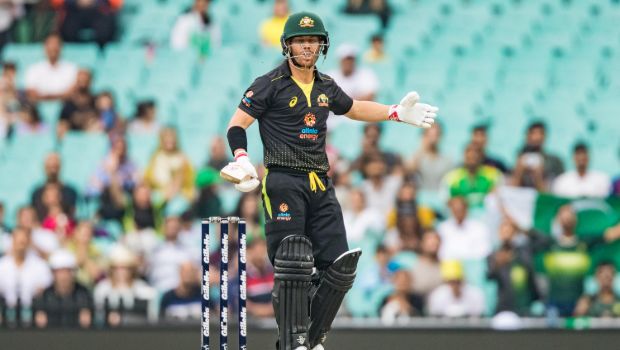 Australian talisman opener David Warner has played down concerns regarding his indifferent form in the recent past.

Warner played only two matches for Sunrisers Hyderabad in IPL 2021 in the second phase of the tournament and could not score big in those games. The left-hander then also could not get going in the warm-up matches ahead of the T20 World Cup 2021.

However, Warner bounced back in style as he scored a match-winning knock of 65 runs off just 42 balls in Australia’s second game of the T20 World Cup 2021 against Sri Lanka. The southpaw helped his team chase down a total of 155 runs and Australia is looking good at the moment.

Warner was able to provide a fine start to the team with skipper Aaron Finch as the duo added 70 runs for the opening alliance. Thus, Australia was able to secure their second win of the tournament as they won convincingly by seven wickets.

Warner getting back among the runs is crucial for Australia and he will look to keep providing solid starts to his team at the top of the order.

David Warner said in the post-match presentation, “I actually think people talking about my form is quite funny. I laugh at the matter. I’ve played hardly any cricket. I had two games in the IPL and then warm-up games are warm-up games for a reason.”

He added: “Tonight, I had to obviously start fresh. Everyone was talking about my form, which I reiterated was not a thing I was worried about. It was about going out there and starting well. That’s all we’re trying to do, apply pressure to the bowlers.”

Warner added that the form is like the trough and crest of the game and as a player, one has to ride both of them.

“Shutting the critics down? No, never. That’s the world of sport. When you ride the highs, you’ve got to ride the lows; you’ve got to stay confident, keep a smile on your face and never let it get to you,” David Warner concluded.

Australia has won both of their matches and they have got off to a fine start. The Aaron Finch-led team will want David Warner to continue in a similar fashion and carry the rich form ahead.

Australia will next face arch-rivals England on Saturday.