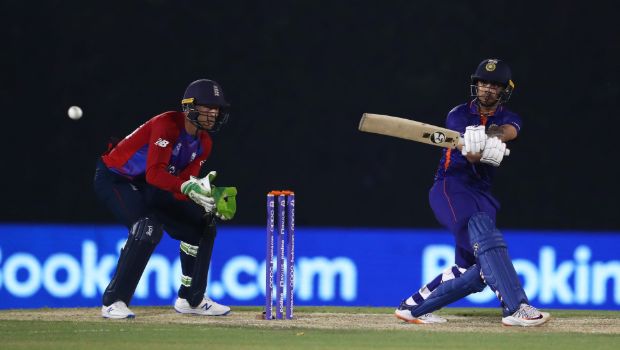 Former Indian legendary batter Sunil Gavaskar said he would prefer Ishan Kishan ahead of Hardik Pandya if the all-rounder is fit enough to bowl in the must-win match against New Zealand.

Pandya had suffered a shoulder injury against Pakistan, which had raised doubts on his selection.

However, Pandya had bowled in the practice session and he is expected to regain full fitness for the big game against the Kiwis. But Pandya isn’t in the best of forms as he had scored only 127 runs in 11 innings of IPL 2021.

On the other hand, Ishan Kishan is known for his pyrotechnics and he can hit the ground running. Kishan had scored a blistering knock of 84 runs against Sunrisers Hyderabad in the last league stage match of Mumbai Indians. The southpaw then scored a whirlwind fifty against England in the warm-up match.

Speaking to Sports Tak, the veteran said: “If Hardik Pandya is not bowling – due to that shoulder injury he sustained in the match against Pakistan – Ishan Kishan has been in brilliant form so I will surely consider him ahead of Pandya.”

The Little Master backed Shardul Thakur to replace Bhuvneshwar Kumar. Bhuvi hasn’t been at his best while Thakur had scalped 21 wickets in 16 matches of IPL 2021 for Chennai Super Kings and he can also contribute with the bat while batting down the order.

“And perhaps, you can think of Shardul Thakur in place of Bhuvneshwar Kumar. But otherwise, if you make too many changes, then you will show the opposition that you have panicked,” Sunil Gavaskar added.

Gavaskar added that there is no need for India to hit the panic buttons as they have a good team and they can go all the way in the tournament.

“If you make changes, it will show that the team has panicked. There is no need to panic because they have a good team.”

“Yes, you’ve lost a match to a good team but that doesn’t mean that going forward, India won’t win the match or win the tournament. If you win the next four matches, you can make it to the semi-final and from there, possibly even the final. So, there is no need to make too many changes,” he concluded.

India will next face New Zealand on Sunday in Dubai.