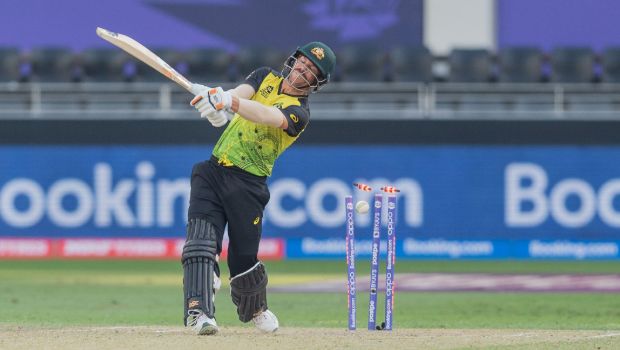 A few months ago, doubts were raised on David Warner. After a couple of bad innings, he was sacked as Sunrisers Hyderabad’s captain.

In fact, Warner didn’t even get a place in the team’s final XI, which was surprising as he is one of the best foreign batters in the IPL. Now, David Warner is the player of the tournament at the T20 World Cup.

Warner proved his mettle as he scored 289 runs at an average of 48.17 and a strike rate of 146.70 in the tourney. The southpaw scored three fifties in the T20I showpiece and the most important one came in the final against New Zealand as he scored 53 runs off just 38 balls with the help of four fours and three sixes.

Australia was able to chase down 173 runs after fine knocks from David Warner and Mithell Marsh as the Aaron Finch-led team won by eight wickets at the Dubai International Cricket Stadium on Sunday to clinch their maiden T20 World Cup crown.

Warner’s seven innings in the T20 World Cup read as 14 vs South Africa, 65 vs Sri Lanka, 1 vs England, 18 vs Bangladesh, 89* vs West Indies, 49 vs Pakistan, and 53 vs New Zealand. The pugnacious left-hander peaked at the right time in the tournament and delivered for Australia.

David Warner said in the post-match presentation, “Always felt really well. Didn’t get much time in the middle in the two practice matches obviously. But for me it was about going back to basics.

Going to hard, synthetic wickets and try to hit some balls. Definitely up there with 2015. Being part of the World Cup final against England a decade ago definitely hurt. These guys are a great bunch of guys. Great support staff, great team, great support back home. Just wanted to put on a great spectacle for everyone. Bit of nerves around with a good score on the board. Just great to see the guys deliver”.

Warner was able to prove his mettle and showed why he is one of the best T20 batters in the world. The southpaw made most of his experience and delivered in the big matches for Australia.

The left-hander has always been instrumental in the success of the team and brought his best when it mattered the most. Warner will now look to continue his rich form in the Ashes.