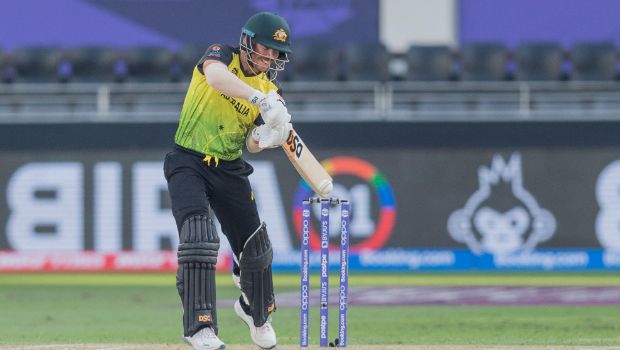 Australian skipper Aaron Finch admitted that he was shocked when people were writing off David Warner before the T20 World Cup 2021.

Warner once again proved why he is one of the best white-ball players of the current generation as he scored 289 runs at an average of 48.17 and a strike rate of 146.70 in the tourney.

Warner scored a fine knock of 53 runs off just 38 balls with the help of four fours and three sixes and thus played a crucial role in helping his team chase down 173 runs in the final of the T20 World Cup against New Zealand on Sunday.

Warner was at his best throughout the tournament and scored three fifties to deliver the goods for Australia. A lot of doubts were raised on David Warner before the T20 World Cup as he was sacked as Sunrisers Hyderabad captain and was also even dropped from the team’s final XI in the UAE leg of IPL 2021. In fact, Aaron Finch also revealed he called Justin Langer and told him that Warner will be the player of the tournament at the T20 World Cup.

On the other hand, Aaron Finch also heaped praise on Adam Zampa, who was magnificent throughout the tournament for Australia. Zampa scalped 13 wickets in seven matches in the tourney and bowled with an average of 12.08 as he got the big wickets for his team. Finch added that Zampa was his Player of the tournament for his consistent performances.

Furthermore, Mitchell Marsh was also magnificent for Australia in the final as he scored an unbeaten match-winning knock of 77 runs. Moreover, Josh Hazlewood was also right on the money as he scalped three wickets in the four overs he bowled and conceded only 16 runs. Thus, Australia was able to come up with a fine collective effort in the all-important final.

Aaron Finch said in the post-match presentation, “This is huge. To be the first Australian team to be able to do it. So proud. We knew our backs were against the wall. We had some great individual performances, some great team performances.

Can’t believe people wrote him off saying he was done (Warner). That’s when he plays his best cricket. Was almost like poking the bear. The player of the tournament for me (Zampa). Mitch Marsh – what a way to start his innings today. Wade came into this game with an injury cloud but got a job done. Stoinis did the business”.

Not many had put their money on Australia before the T20 World Cup 2021 but the Aussies once again showed why they are a force to reckon with in major ICC events.