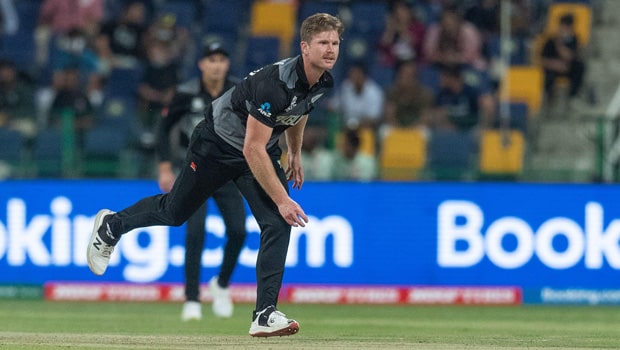 Legendary former Indian batter Sunil Gavaskar heaped praise on Jimmy Neesham after the all-rounder played a handy knock to help New Zealand beat England by five wickets at the Sheikh Zayed Stadium, Abu Dhabi. The Kiwis were behind the eight-ball as they needed 57 runs off the last four overs when Jimmy Neesham joined forces with Daryl Mitchell.

Neesham was able to hit the ground running as he scored a six against Chris Jordan on the second ball he faced. The southpaw went on to score a fine cameo of 27 runs off just 11 balls to get New Zealand back in the contest with his blistering batting. The left-hander scored one four and three sixes as he batted at the top of his game.

Neesham scored his runs at a strike rate of 245.45 and catapulted his attack on the opposition. The left-hander targetted the leg-side boundary and he was able to time the ball with perfection.

Sunil Gavaskar said while talking to Sports Today, “What an innings, scoring at a strike rate of over 240. He was hitting the ball well. He had a bit of luck with that Jonny Bairstow catch which went over the boundary and it became a six. But clearly, Neesham has got the ability. He is a big hitter, he can bowl usefully and Kane Williamson showed faith in him by giving him the 20th over of the England innings so yes, it is good to see Jimmy Neesham do justice to his talent.”

On the other hand, the Little Master gave credit to New Zealand skipper Kane Williamson for getting the best out of the players. Gavaskar added Williamson never puts any kind of undue pressure on his players, which is the key to his success.

“They have a lot of belief in themselves. They are a very close-knit unit. It’s a small country. So, when they get together as a team, you can see the unity. They are led by an absolutely terrific person. A person who will never put pressure on them, who is respected for the way he handles situations and for the way he himself bats and for the legend that he is in the sport.”

New Zealand will look to win their maiden T20 World Cup title and they will face either Pakistan or Australia in the final on Sunday.