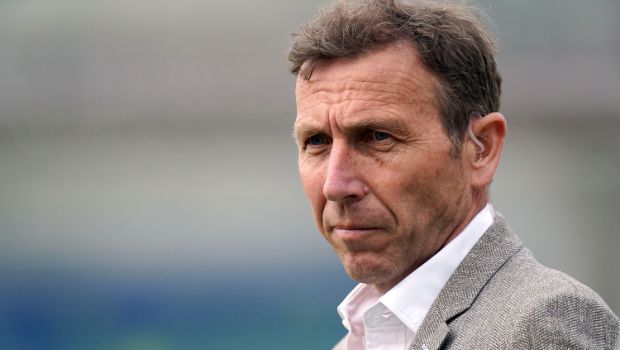 Former England skipper Michael Atherton believes it is too easy for England right now in the ongoing T20 World Cup.

Eoin Morgan’s team registered their second win of the tournament as they convincingly defeated Bangladesh by eight wickets and 35 balls to spare at the Sheikh Zayed Stadium on Wednesday.

England made a merry of the run chase of 125 runs as they played at the top of their game. The 2019 World Cup winners had beaten the defending champions in their opening match by six wickets as they skittled out the Windies for a paltry score of 55 runs.

The Eoin Morgan-led team once again came up with a dominating performance as they restricted Bangladesh to a meager score of 124 runs after Tymal Mills scalped three wickets whereas Moeen Ali and Liam Livingstone bagged a brace.

Michael Atherton said while talking to Sky Sports, “It’s too easy for England right now,” said Atherton. “They’ve breezed past West Indies and Bangladesh, and now their net run-rate is absolutely fantastic, and they have points in the bag. They look one of the form teams.”

On the other hand, it is well known that England is a formidable unit in the limited-overs format and they are known for their aggressive batting. Atherton added the English team is a feared unit which was not the case before.

“England is feared now in a way that they didn’t say four or five years ago in one-day cricket – in any conditions, not just at home – including these conditions which were once regarded as quite alien. The bowlers look well-drilled. Morgan knows exactly what he’s about. He’s got a clear plan, but of course in T20 cricket, that can go out of the window.”

Meanwhile, former England captain Nasser Hussain reckons the key to the team’s success is their planning and they have been able to execute their plans to perfection. Eoin Morgan has led with aplomb and the results are palpable.

“The key to England’s success is the planning – Mills spoke in the last game about bowling back of a length and heavy lengths, and we showed a pitch map comparing the last World Cup to this one, and they are bowling two meters shorter!”

“England has really gone for heavy lengths; their planning is brilliant, their bowling as a unit is brilliant – and the fielding has been too.”

With two wins in two matches, the Eoin Morgan-led team has shown that they mean business in the marquee event.