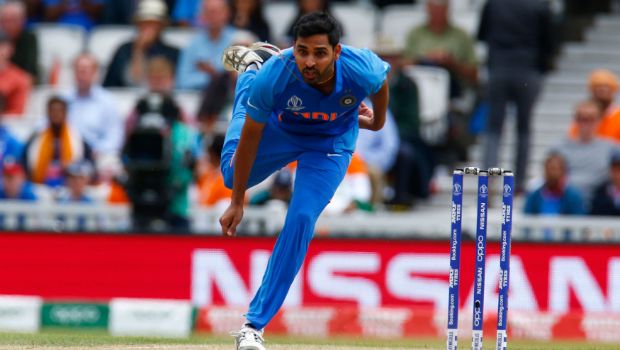 Former Indian opener Aakash Chopra is not convinced that the team can afford to play Bhuvneshwar Kumar in the final XI against arch-rivals Pakistan in their opening match of the T20 World Cup. Kumar hasn’t been in the best of forms in the recent past and Chopra questioned the veteran pacer’s place in the team.

The swing master didn’t have a great run in the IPL 2021 for Sunrisers Hyderabad as he scalped six wickets in 11 matches and bowled with an average of 55.83 and economy rate of 7.97.

Furthermore, the fast bowler from Uttar Pradesh conceded 54 runs in his quota of four overs in the warm-up match against England without taking any wicket. Kumar conceded his runs at an economy rate of 13.50 and looked out of rhythm as he was taken for runs.

Aakash Chopra said on his YouTube Channel, “Bhuvneshwar Kumar has been expensive. He is not looking a patch of his usual self. He has a lot of experience but I am not 100% convinced that you can play him in the XI against Pakistan. I will be thinking about Shardul Thakur.”

On the other hand, Rahul Chahar was also taken for runs as the leg-spinner conceded 43 runs in his four overs and took a solitary wicket. Thus, Chopra feels Varun Chakravarthy will play the next warm-up match against Australia and also the main fixture against Pakistan.

“Rahul Chahar was very expensive. That means I see Varun Chakravarthy playing the next match and against Pakistan. Ravichandran Ashwin bowled well, bowled off-spin as well in the first couple of overs but will you see him playing as the third spinner if three play.”

Meanwhile, Mohammad Shami conceded 40 runs in his allotted four overs however he snared three wickets and did the job for the team against England.

“Mohammed Shami did his job and picked wickets and Bumrah was economical. Mohammed Shami’s yorkers are falling in place but he can also be expensive but then Bumrah is your No.1 fast bowler and Mohammed Shami is your second fast bowler. That was a big takeaway.”

India won against England convincingly by seven wickets and will play their second warm-up match on Wednesday against Australia.