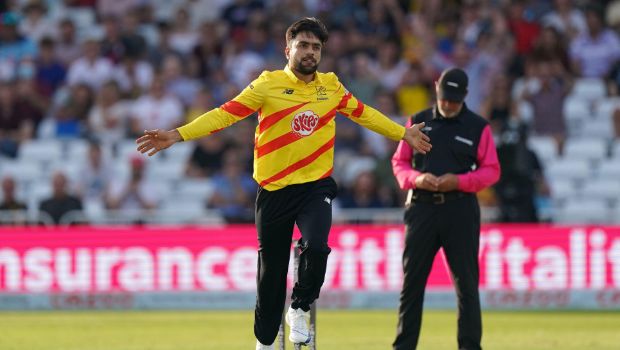 Afghanistan talisman spinner Rashid Khan has created history as he has become the youngest bowler to take 400 T20 wickets at the age of 23 years.

Khan achieved the milestone when he accounted for Martin Guptil in his team’s last Super 12 match of the ongoing T20I World Cup 2021 at the Sheikh Zayed Stadium, Abu Dhabi on Sunday.

Rashid’s first-ever T20I scalp was Zimbabwe’s batter, Sikander Raza, in 2015. Since then the linchpin leg-spinner has scalped 103 wickets while playing for his national team. Furthermore, Rashid has also savored success in the Indian Premier League and he has bagged 93 wickets while playing for Sunrisers Hyderabad and has played a key role in the success of the franchise.

The leg-spinner has also plied his trade for teams in T20 leagues like Caribbean Premier League, Big Bash League, and Vitality T20 Blast. He is the 4th bowler to enter the 400 club after Dwayne Bravo (553), Sunil Narine (425), and Imran Tahir (420).

Earlier, the leg-spinner had come the fastest bowler to take 100 T20I wickets. Lasith Malinga, Tim Southee, and Shakib Al Hasan are the other three bowlers who have picked more than 100 T20I wickets.

Meanwhile, Rashid could only take one wicket against New Zealand and conceded 27 runs in his quota of four overs. Afghanistan lost by eight wickets and was knocked out of the tournament.

On the other hand, Afghanistan could only manage 124 runs on the board after Mohammad Nabi decided to bat first. Afghan team lost three wickets in the powerplay overs and it was always going to be difficult for them to get back in the contest. Nabi admitted that they were at least 30 runs short of a par score.

Mohammad Nabi said while talking in the post-match presentation, “It was our plan to bat first and put a decent total on the board. We didn’t start well, early wickets slowed us down, we built partnerships but didn’t we finish well. We were 30 runs short on this pitch. We were eyeing 145-160, that would have been a decent total. Our bowling is strong, but we didn’t get a good total.

The pitch wasn’t helpful too. We tried our best and bowled really well in this game. We have a lot of experience playing in the UAE, we played good cricket and we take a lot of positives from this tournament. Hopefully, we work on our mistakes and do better in the upcoming matches”.