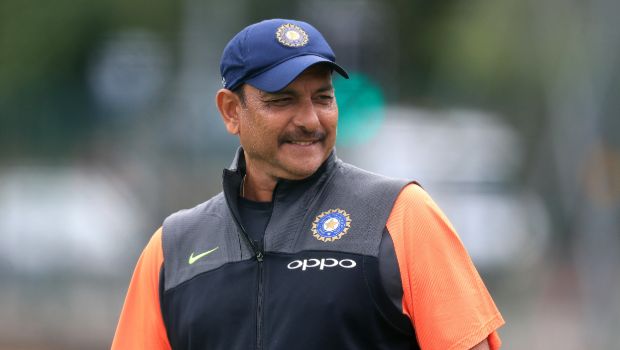 India’s outgoing head coach Ravi Shastri gave a motivating speech to the team as the side won their last match under his tutelage.

India played a total of 183 matches under Ravi Shastri’s guidance as a head coach out of which the team won 118 and lost 53 games while five were drawn, four were tied and three ended in no result. Thus, Shastri was able to take Indian cricket to new heights under his tenure.

The tipping point in Shastri’s stint as a head coach came when India defeated Australia twice in the opposition’s own backyard in the 2018-19 and 2020-21 Border-Gavaskar series. India showed under Shastri that they are a force to reckon with in all the playing conditions and they can get the desired results across the formats while playing away from home.

Shastri took over the head coach of the Indian team in 2017 and he was given an extension after the 2019 World Cup. Thus, there is no doubt that Shastri did a fine job in getting the best out of the players in his four years of the contract.

Shastri said in a video shared by BCCI, “You guys a team have over-exceeded my expectations with the way you have played. Over the last few years, you go across the globe, across all formats, and beaten everyone makes you one of the great teams that have played the game”.

“Not a great Indian cricket team, this will go down as one of the great teams that have played the game over the last 5-6 years. Because the results are there to be seen. Yes, we didn’t have a great tournament, we could have won 1-2 ICC tournaments that didn’t happen but that is sports, you will get another chance. You will be wiser and more experienced when the next opportunity comes,” Ravi Shastri added.

Shastri added that the most important thing in life is not about what you accomplish but what you overcome. Shastri stated the team has overcome hurdles and has come up with collective efforts throughout the last couple of years.

“For me, the most important thing in life is not about what you accomplish, it is what you overcome. So what you have gone through in the last two years will covid, the hurdles that come on the way, the write-offs that happen, everything and you go through all that and become stronger in the mind and tougher and ready to play the game at the highest level and compete and that is the best thing I like about this Indian cricket team,” Ravi Shastri concluded.

India will now face New Zealand in the three-match T20I series from November 17.