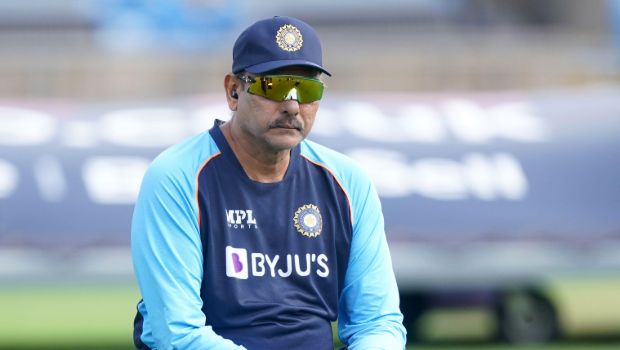 India’s head coach Ravi Shastri has revealed that the dew factor will decide whether they will play extra seamer or spinner in their opening match of the T20 World Cup against Pakistan.

There are question marks on the bowling fitness of Hardik Pandya, which means India might have to play with at least five genuine bowlers.

Furthermore, Bhuvneshwar Kumar isn’t in the best of forms and he conceded 54 runs in the first warm-up match against England. Thus, it will be interesting to note India’s playing combination against Pakistan and the onus will be on Jasprit Bumrah, Mohammad Shami, and Shardul Thakur.

“We’ll just try to see how much dew is around and accordingly decide to bat or bowl first. Also helps us decide about playing an extra spinner or seamer,” Shastri told former India wicket-keeper, Deep Dasgupta, during an interaction for official broadcasters ‘Star Sports’.

The Indian team is well prepared as the players recently played in the IPL in the same UAE conditions and thus they were well acclimatized to the conditions.

“Boys have been playing IPL for the last two months, so I don’t think they need too much of preparation. It’s more about them getting together and adapting together. Get some rhythm going, some energy going.”

Shastri also shed light on the team’s warm-up matches before the big clash against Pakistan on 24th October.

Shastri said: “Everyone can bat, everyone can bowl (in this game). So it will help us to get an idea about who is doing how. “Not really (regarding any locked strategy). We’ll just see how things go and work a combination around.”

India won their first warm-up match against England by seven wickets whereas they will face Australia in the second game.