Home » Cricket » The Ashes: If he gets it right, he is a wicket-taking machine – Ricky Ponting on Mitchell Starc

The Ashes: If he gets it right, he is a wicket-taking machine – Ricky Ponting on Mitchell Starc 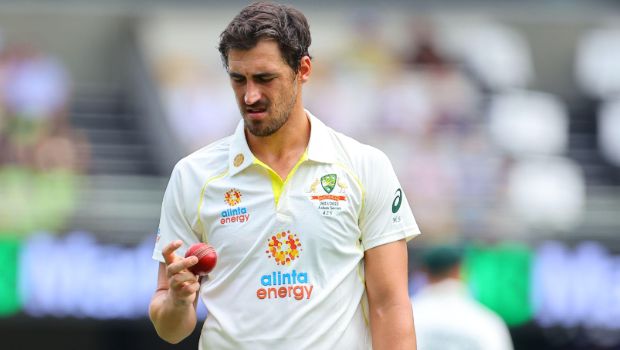 Australia’s former skipper Ricky Ponting lauded the team’s gun fast bowler Mitchell Starc. Ponting stated that if Starc gets his line and length right, he could be a wicket-taking machine.

Starc made a fantastic start in the opening Ashes Test against England at the Gabba, Brisbane on Wednesday as he dismissed Rory Burns on the first ball of the series.

Ergo, Starc became the second bowler in the history of the Ashes to take a wicket on the first ball of the iconic series. Australia’s Ernie McCormick had dismissed Stan Worthington in Brisbane in 1936 and had become the first bowler to achieve the milestone.

Furthermore, Starc also got the big wicket of Jos Buttler, who top-scored for England with 39 runs and was threatening to take the game away from the home side. Thus, Starc returned with impressive figures of 2-35 in 12 overs he bowled and did a fine job for Australia.

In fact, Starc has often been criticized as he can be a bit wayward in his line and length but he was able to prove his mettle. Starc’s place in Australia’s playing XI had come under the scanner and there were reports that Jhye Richardson could start in his place. However, Cummins decided to back his experienced fast bowler and he was able to stand tall to it.

While speaking on air with Channel 7, Ponting said: “I know there’s been some negativity around about Mitchell Starc, but that’s what he does, he takes wickets with the new ball. Whether it be a red ball or a white ball, if he gets it right he’s a wicket-taking machine.”

Moreover, this was Cummins maiden fifer against England and he played a key role in skittling England out for a mere score of 147 runs on the first day. Josh Hazlewood and Cameron Green contributed with two and one wicket respectively.

Australia will look to get a lead on the second day while England will aim to make a solid comeback.