Home » Cricket » The Ashes: There is no doubt that England’s top-order has been too defensive in this series – Nasser Hussain 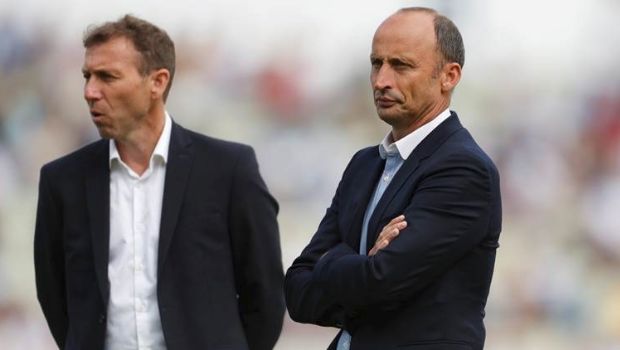 Former England captain Nasser Hussain believes the English top-order has been too defensive in the ongoing Ashes against Australia.

England’s openers have often found themselves behind the eighth-ball in the ongoing Ashes, which has forced them to adopt a defensive approach.

Furthermore, Haseeb Hameed hasn’t been able to get going against a lethal Australian attack as he has mustered only 80 runs in four Test matches. Rory Burns could only gather 51 runs in the first two Test matches and thus he was dropped.

Hussain feels the Australian bowling line-up can easily build pressure on England’s batting unit as the top-order is only looking for survival and they aren’t looking to attack. The former skipper believes England should adopt an attacking approach and follow the footsteps of Jonny Bairstow and Ben Stokes as the duo batted aggressively in Sydney in the first innings. Zak Crawley also scored an attacking knock of 77 runs in the second innings of the fourth Test.

Nasser Hussain wrote for Daily Mail, “The way to go is the way Ben Stokes and Jonny Bairstow counter-attacked in that first innings at Sydney and how Zak Crawley played in the second. Ricky Ponting has spoken about how great bowlers love it when batters are defensive and there’s no doubt England’s top order have been too defensive in this Ashes.”

Hussain added: “They have to put the bowlers under pressure, even with balls they are not looking to attack. Trevor Bayliss said when he was England coach that positive cricket does not mean swinging from the hip.”

Hussain added that it will be imperative for England to get their selection right in the final pink ball Test of the series. England has lost their previous two day-night Test matches and selection has been one of the reasons for their losses.

“Again, England needs to pick the best XI available for this game. England should beware of overthinking the conditions, too. They have got their side wrong for the last two pink-ball Tests in Ahmedabad and Adelaide and have only won one day-night Test, against West Indies at Edgbaston. Conversely, Australia has won all nine of their pink-ball Tests.”

Hussain added that England should play both Ben Stokes and Jonny Bairstow if the pair can bat. Stokes is nursing a side strain injury while Bairstow was struck on his thumb in the first innings of the fourth Test by Mitchell Starc.

“The fitness of Stokes is key. If he can’t bowl, it will hugely affect the balance of the side but, even though I never like going into a Test with injured players, he should play as a batter if it will not damage his side further because he is one of England’s two best players. The same applies to Bairstow. If he is fit to bat but not to keep, he should do so, then Sam Billings can make his Test debut with the gloves.”

The final Ashes Test will be played in Hobart from January 14.