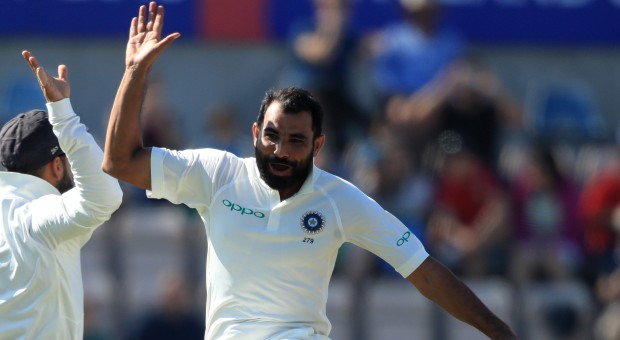 India’s fast bowler Mohammed Shami feels the current group of fast bowlers is the best ever in Indian Cricket history. Shami stated that the team has bowlers in the reserves who can clock 145 kmph and thus they have a potent bench strength. The pace battery has shown a spike in their improvement graph in the last few years and they have been at the top of their game.

A lot of credit goes to the improved fitness of the bowlers, which has allowed them to bowl above 140 kmph consistently. The Indian captain Virat Kohli has backed the pacers to the hilt and he also deserves the credit. Last but not the least, India’s bowling coach Bharat Arun has also played a key role in the development of the bowlers.

Meanwhile, India’s pace trio of Ishant Sharma, Mohammed Shami and Jasprit Bumrah have taken giant strides in the recent past. All of them bring different traits to the table and they are mostly right on the money. They have got the pace to trouble the batsman and they are also accurate in their line and length.

“Even the world acknowledges that India never produced five genuine fast bowlers in a package at one go. Not in Indian crickets history. We have bowlers in the reserves who can bowl 145 kms”, Shami said while talking to Deep Dasgupta on ESPN Cricinfo.

“This is the best attack as no one has any jealousy and everyone enjoys each other’s success. It feels like a family”.

Shami is doing a fine job and the Bengal pacer has an upright seam position, which helps in the seam movement from the surface. The right-arm pacer has a smooth action and thus he can bowl in excess of 140 kmph.

On the other hand, the pace battery had done a brilliant job on the tour of Australia. India’s pace trio had scalped 48 wickets collectively and they had played a key role in the success of the team in the Test series of 2018-19.

Meanwhile, India hasn’t been known to produce fast bowlers in the past. The team has had a few fast bowlers who have impressed but never they have had a unit which has sent shivers down the opposition’s spine.