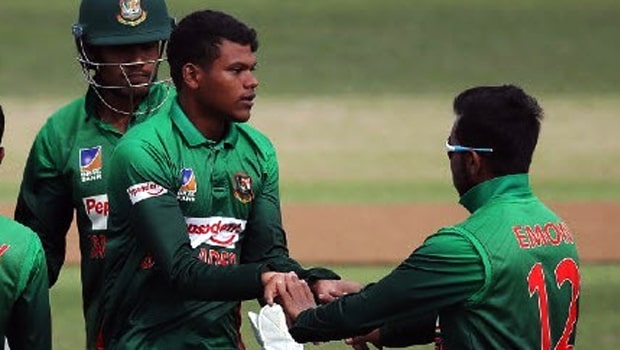 The ICC U-19 World Cup has reached its final stage and two Asian sides, India and Bangladesh, have emerged as the deserved finalists of this mega event.

While the Indian colts were one of the favourites to win this competition even before it started, Bangladesh U-19 punched above their weight to make their way to the final. It was possible for them due to the effort they put together as a team. However, there are a few individuals who have stood out with their performances in the tournament so far and thus could prove to be quite a handful to handle for the Indian side in the final showdown. Let’s have a look at those players.

Mahmudul Hasan Joy: The top-order batsman has led the charge right from the front for Bangladesh in this tournament. He has amassed 178 runs in the competition so far at a fabulous average of 58 and his best outing came in the all important semifinal against New Zealand when he smashed a century to power his team into the final. Joy stood up with his memorable knock when Bangladesh were reduced to 32/2 during their chase of 212 runs and that sums up the importance of his innings.

Rakibul Hasan: The left-arm orthodox spinner is Bangladesh’s leading wicket-taker in this tournament. He has taken 11 wickets so far at a mean average and excellent strike-rate of 8.45 and 16.3 respectively. He has a five-wicket haul to his name in this competition as well. It came during Bangladesh’s massive 104-run victory over South Africa U-19 in the third Super League quarterfinal. The Proteas batsmen got completely bamboozled by Rakibul’s trickery.

Shoriful Islam: The left-arm pacer is yet another bright bowling prospect for Bangladesh. Islam has bowled very well in this tournament amassing a total of seven wickets at an outstanding average of 15.85 and strike-rate of 24.8. He saved his best for the crunch semi-final battle against New Zealand U-19 as he bowled a superb spell of 10-2-45-3. He was totally unplayable with the new ball as he extracted beautiful swing and movement from the conditions. The batsmen were lucky to escape his opening spell, but he came back in the middle and death overs to scalp three of their wickets.