Home » Cricket » U. Yadav does what no other Indian pacer could do in 86 years

U. Yadav does what no other Indian pacer could do in 86 years 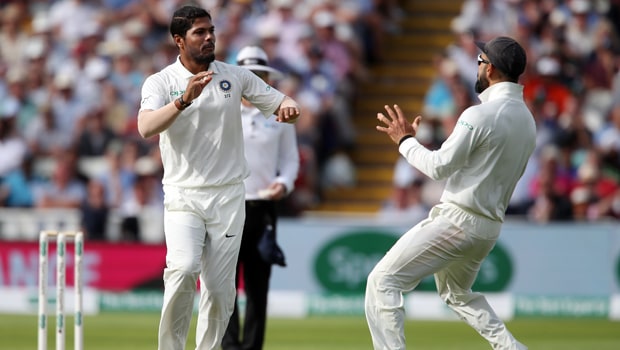 When Indian speedster Umesh Yadav picked up the wicket of George Linde during Day 3 of the third Test between India and South Africa at Ranchi, he created a record that no other Indian pacer had been able to achieve in the 86 years of cricket played on Indian soil.

He became the first Indian bowler to register three or more wickets in five successive innings at home. 6/88, 4/45, 3/37, 3/22 and 3/40 are the figures he registered before his run came to an end with figures of 2/35 in the second innings of this match against South Africa.

Before Umesh, there have been 98 players, who can be broadly classified as pacers, featuring in 270 Tests for India. They have taken a combined 1251 wickets with 37 of those 98 pacers playing 10 or more Tests for India. But none of them could achieve this unique feat that the Vidarbha pacer can now brag about.

Only a West Indian, the great Courtney Walsh, has the bragging rights for this record on Indian soil. He had a run of seven successive innings in India in which he claimed three or more wickets. And that sums up the class of the Caribbean legend once again.

Umesh could have gotten even closer to that record if he could have taken one more wicket on the fourth day of play, which saw India bulldozing South Africa by an innings and 202 runs. But, nevertheless, this is a tremendous achievement for him.

Interestingly, he has always been a better bowler at home than in helpful overseas conditions. He averages 42.19 away from home and takes more than 60 deliveries per wicket. However, he has a mean average of 25.90 at home and takes less than 50 deliveries for each of his wickets on average.

In fact, he has been in terrific form during the last five matches in Indian conditions. The 31-year-old has taken 26 wickets at an average of 13.34 and a strike-rate of 24.1. So, he has been one of the main reasons behind India’s formidable home run in the last few years.