Home » Cricket » U19 CWC: A look at the heroes of India’s road to the final

U19 CWC: A look at the heroes of India’s road to the final 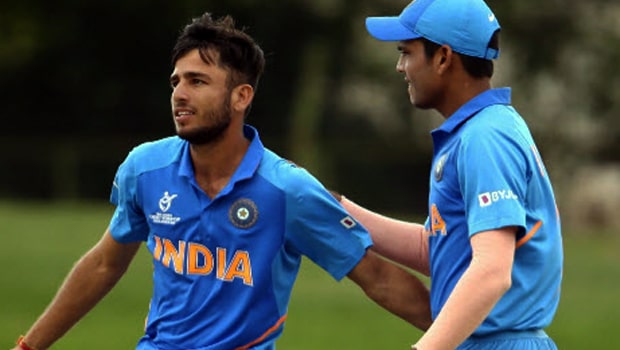 The Indian colts have been in sensational form in the ongoing U-19 World Cup. They have won each and every match so far and thus became the first team to qualify for the final.

The group stage turned out to be a smooth ride for them as they easily romped past the Japan, Sri Lanka and New Zealand U-19 sides. Although Australia U-19 tested India to the core in the quarterfinals, a fine bowling performance helped them to sail through that as well.

And, when it was time to take on the arch-rivals in the semifinal, India came up with a commanding all-round performance to book a spot in the final as well. However, such a splendid run in the tournament wouldn’t have been possible without some major performances from some of the players. They turned out to be heroes on their day. So let’s take a look at all those players who built India-U19’s road to the final.

Yashasvi Jaiswal: The 17-year-old has played a massive role in making such a sublime run of form possible for India. Jaiswal has amassed 312 runs in the tournament so far at an excellent average of 156. It includes three fifties and one century as well. His best score of an unbeaten 105 came in the semifinal against Pakistan U-19 during his unbroken opening stand of 176 with Divyansh Saxena.

An early bowling change for India as Ravi Bishnoi enters the attack.

Find out about his journey to the Under 19 World Cup!#U19CWC | #INDvPAK | #FutureStarspic.twitter.com/Hs4NPGoKNi

Ravi Bishnoi: The leg-spinner is the highest wicket-taker for India U-19 in the tournament so far. He has picked up 13 wickets in five matches at an excellent average and strike-rate of 11.61 and 19.3 respectively. His best figures of 4 for 5 came in the group match against Japan U-19. But that wasn’t his only four-wicket haul as he registered figures of 4/30 against New Zealand as well.

Kartik Tyagi: The pacer has been in fabulous bowling form as well. He has picked up 11 wickets so far in the tournament at a scintillating average and strike-rate of 10.90 and 18.7 respectively. His best spell came against Australia in the quarterfinals. Tyagi registered superb figures of 4/24 to power India into the semifinals. He bowls at brisk pace and the movement he extracts off the surface due to his excellent seam positioning makes him a tricky customer to face.