Home » Cricket » Under-19 World Cup: India qualifies for the semi-final after beating Australia by 74 runs

Under-19 World Cup: India qualifies for the semi-final after beating Australia by 74 runs 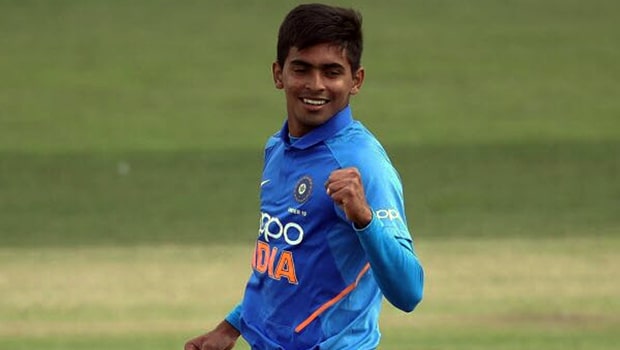 The Indian Under 19 team has progressed to the last four of the World Cup to be held in South Africa.

The defending champions continued their winning run, beating Australia brilliantly. They defended their low total to beat the Aussies by 74 runs in the quarter-finals of the ongoing tournament on Tuesday.

Kartik Tyagi, was a thorn in the flesh of the Australia team after the bowler got three wickets in the first over. With the damage done by the pacer, Australia couldn’t come back into the game as they were only able to manage 159 before being bowled out in their chase of 233.

Their next stop is a clash with either Pakistan or Afghanistan.

Atharva Ankolekar started the run with a half-century. It was followed by a gritty performance from Yashasvi Jaiswal (62), which helped India post 233/9 in their 50 overs.

According to the bookmakers, Australia had been picked as favourites to win the game, but it became another story after six balls.

The favourites got off to their worst possible start with their innings. Opener Jake Fraser-McGurk was a victim of a mix-up on the very first delivery as he was sent out early.

When it was the turn of the captain, Harvey McKenzie, he got trapped with LBW by Tyagi on the fourth delivery. Lachlan Hearne’s time was also shortlived with Tyagi hitting his stumps.

They were able to get something with the partnership between Patrick Rowe and opener Sam Fanning who combined 51 runs.

Tyagi couldn’t get his hattrick but still had the last laugh as he came back for his next over to send Rowe out in the 22nd over.

Concussion substitute, Liam Scott, joined Fanning in the middle, and the two gave India some resistance as they moved at a slow pace, hitting the occasional boundaries.

While it was looking like India had lost their early advantage, they came back into the tie with spin sensation Ravi Bishnoi getting the crucial breakthrough in the 41st over. The bowler got a faint edge of Scott’s bat, which brought to an end an impressive 81-run stand.

Their hope was dashed in the next over when Sam Fanning got a glove on a short ball by pacer Akash Singh with Dhruv Jurel accepting the catch with glee.

India ended their hope of a semi-final place when Connor Sully was removed while trying to take a quick single off the very next delivery. Singh hit Todd Murphy’s stumps to make it three wickets in three balls.

With three deliveries in the next over, Akash Singh removed Matthew Willans and secured a huge win for the side.

Tyagi emerged an of the match courtesy of his four wickets for 24 runs in eight overs.